The Lady of the Lake… a scientific ghost story

Posted on October 31, 2010 by skullsinthestars

Ghost stories are somewhat passé in our modern, technical world — many of the mysterious phenomena that used to fill people with fear in past eras have been demystified thanks to our better knowledge of science. The phantom lights in the swamp at night are swamp gas, the strange creaks and groans at midnight are just the house settling.  The strange pterodactyl-like creature buzzing cars turns out to be a rare stork, and the animal sounds coming from the mass grave of circus animals and performers comes from the nearby zoo.

Science also introduces new horrors sometimes, by introducing us to concepts alien to our comfortable daily life.  For instance, we have the botfly, which lays its eggs in the skin of living mammals, and the assassin bug, which injects its (insect) prey with acid and literally drinks their liquefied internal organs.

People have often claimed that science kills the wonder of nature by explaining it, though anyone who really studies science knows that it simply introduces us to new wonders.  Similarly, science can introduce us to new fears and horrors, and on this Halloween I thought I’d discuss a truly ghostly tale that involves a relatively unknown natural phenomenon, a phenomenon that in fact solved a murder.

Lake Crescent lies in the far northwest corner of Washington State, entirely within Olympic National Park.  It is relatively remote from the hustle and bustle of the modern world, with the town of Piedmont on its northern tip and the next largest town, Port Angeles, some 17 miles away. 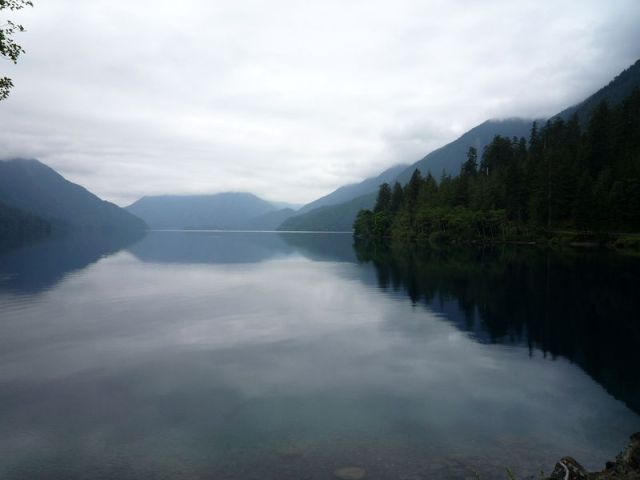 The lake was carved by retreating glaciers during the last Ice Age; its depth is not known with certainty, but likely has parts that are deeper than 1000 feet.  It is a popular recreational area of undeniable beauty, but also carries within it a number of sinister mysteries.

In July of 1929, for instance, Russell Warren had picked up his wife Blanch from the hospital at Port Angeles and a new washing machine, and they were returning to their logging camp closer to the Pacific coast.  They vanished without a trace; the last time they were seen was in their car heading west a few miles from Lake Crescent.  In 2001, investigators attempting to solve the disappearance turned up what might be the lid of the washing machine in the water, and in 2002 the car itself was apparently found, albeit with no bodies.

The car was found off of a point known as Ambulance Point, so named from an incident in the 1960s when an ambulance careened into the water.  The medics managed to escape, but not so the injured logger who was strapped into the back.

The most fascinating and chilling story, however, is that of Hallie Latham Illingworth, now referred to in legend as the Lady of the Lake:

Hallie was born in January of 1901 in Kentucky, and gradually wended her way west as a young adult.  She spent some time in Port Angeles, and by 1936 she had ended her second marriage and was working at the Lake Crescent Tavern as a barmaid.

At the tavern, she met Montgomery “Monty” J. Illingworth, and the two were married in June of 1936.  The marriage was apparently a turbulent one; Hallie would show up to work with bruises and black eyes, and the police were called to break up a pre-dawn fight some five months into their marriage.

Then, in the early morning of December 22, 1937, Hallie vanished without a trace.  Monty claimed that his wife had run off with a sailor from Alaska, and soon afterwards he ran off to Long Beach, California with another woman; he would be granted a divorce from Hallie in 1938.  His story seemed suspicious, however, as none of Hallie’s relatives heard anything from her ever again.

On July 6, 1940, two fishermen spotted a large object floating on the surface of the water.  Coming in for a closer look, they saw what was apparently a body wrapped in blankets and hog tied with heavy rope.  The coroner and the sheriff were called, and found a very unusual corpse waiting for them (source):

Before them lay the fully-formed body of a woman in her mid-thirties.  It was not bloated as drowning victims usually are.  The total weight of the corpse was less than fifty pounds, and there was no odor of decomposition or decay.  Dr. Kaveney claimed, “I never saw a corpse just like this one before.  The flesh is hard, almost waxy.  She must be nearly as large as when she went into the water.  I’d say she is about 5 foot 6 inches in height and that she weighed about 140 pounds when alive.” Sheriff Kemp gave the opinion: “It’s more like a statue.  The flesh has turned to some rubber-like substance.”

What had in fact happened to the body is a process known as saponification, the conversion of fatty acids into soap.  When the body had been submerged in the deep waters of the lake, the cold prevented decomposition and the salts and calcium in the water slowly converted the tissue into a material like Ivory soap, called adipocere.  Just like Ivory soap, a body converted in this manner floats.  Though this one had been apparently weighted down, the ropes connecting to the weights eventually decayed, allowing the body to float to the surface.

If this case is not ghastly enough, saponification has been involved in other macabre stories.  When Augustus Granville (1783-1872) was performing an autopsy on a mummy in 1825, he found a waxy substance on the body that he assumed was an ingredient used in the mummification process.  He converted some of this wax into candles that he used to light a public lecture he gave on the dissection — in essence, he was illuminating his lecture with converted human body fat!

The mysterious woman of soap found at Lake Crescent could not be easily identified, however; though well-preserved, it was still missing the face and tips of fingers and toes.  Remnants of a dress, stockings and garter were found, and the corpse retained its auburn hair.  The body showed clear evidence of being strangled.

A special investigator was called in, Hollis B. Fultz of the Washington state attorney general’s office, and he zeroed in on Hallie from missing persons reports.  The corpse had a distinctive upper dental plate, and pictures of this plate were circulated to some 5,000 dentists around the region.  One dentist in South Dakota connected it to Hallie, making it a positive identification in 1941.

On October 26, 1941, Monty Illingworth was arrested in Long Beach, and he was extradited back to Port Royal for trial.   The trial began on February 24, 1942, with Monty pleading his innocence and denying that the corpse was Hallie.  The dentist’s evidence strongly refuted this, and fibers from the recovered rope matched remnants of a rope that Monty had borrowed from a store many years before.  Monty was found guilty on March 5, 1942 of second-degree murder, and was sentenced to life imprisonment; he was paroled 9 years later.

Monty’s crime was prosecuted, in essence, because of a very well-known chemical process.  The result, however, is a story that is quite eerie and reminiscent of the best ghost stories one can imagine.

1. THE LADY OF THE LAKE; TALE OF THE CORPSE TURNED TO SOAP KEEPS LAKE CRESCENT BUBBLING WITH INTRIGUE (1990).

4. Haunted Legends, edited by Datlow and Mamatas (2010).  This wonderful collection of fictionalized “true ghost stories” contains a story by Laird Barron that is inspired by Lake Crescent; this story first made me aware of the legend of the Lady of the Lake.

This entry was posted in General science, Horror. Bookmark the permalink.