Posted on January 8, 2011 by skullsinthestars

It can take an author many years of writing to establish their own unique voice and style.  Their early works are often a fascinating “what if” scenario, giving a glimpse of directions a well-known novelist may have alternatively taken.  The author Martin Cruz Smith is best known for his Arkady Renko series of mystery thriller novels including Gorky Park and Red Square; before this, however, in 1977, he wrote a horror novel titled Nightwing: 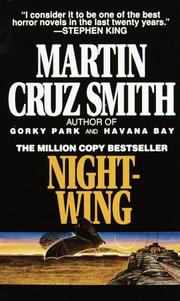 A horror tale that may be crudely summarized as part of the “When animals attack” genre, its inspiration is obvious: Peter Benchley’s Jaws was released in 1974 and the blockbuster movie came out in 1975.  There was a huge demand for similarly themed stories, and I can almost imagine Martin Cruz Smith’s thought process: “You want stories about killer scary animals?  Well, suck-on-this!”

Despite its somewhat derivative nature, Nightwing is actually a nicely-crafted and quite compelling novel.  It has some genuinely creepy elements to it that transcend the otherwise rather limited genre.

The threat in the story is a massive colony of vampire bats.  This isn’t exactly a spoiler, as a bat is shown prominently on the cover and revealed within the first few chapters of the book!  The danger is much more than tooth and wing, however, as it is a literal plague of bats: this deadly flock not only physically rips their prey to shreds, but carries a virulent strain of bubonic plague that threatens millions.

The novel is set in the remote deserts of Arizona, on the reservations of the dwindling Hopi and Navajo tribes.  Youngman Duran is a deputy in the tribal police force, and has a rather dark past, including a stint in the military, a court martial and prison time.  He is a bit of a loner, and as such was naturally drawn to another outcast, the aging tribal shaman Abner.  As the story begins, Abner makes a dark declaration during one of Duran’s regular visits.

“I’m sorry,” Abner apologized to his only friend, “but they got to die.”

Stripped down to underpants and a leather kilt, Abner squatted in the center of the dirt floor grinding cornmeal.  He was past ninety and his brown body was hard like an insect’s.  His gray hair, cut short above the eyes, hung down to frame a flat face with broad cheekbones and wide, peeling lips.

Youngman was a third of Abner’s age.  His hair was shorter, pitch-black and tucked under a dirty Stetson.  Sweat ringed the crown of his hat and sweat stains from his armpits and back merged to turn most of his khaki shirt into a dark sponge.  He shifted his seat, trying to get comfortable without sticking himself with a seat spring.  Youngman hated port wine but real alcohol was hard to find on the reservation.  Besides, he like Abner.

Abner gathered ground cornmeal in his hands and started pouring it inside of the door and, moving backwards, around the corners of the room.

Abner has decided that the only protection for his people, against the greedy oil, gas and water companies exploiting their land, is to end the world.  That night, while Youngman watches, Abner casts a curse to set the apocalypse into motion.

Youngman thinks little about the curse; the next day, however, Abner is found dead in the center of his conjuring circle, his body a shredded mess and curiously exsanguinated.  As more mysterious attacks and deaths accumulate, Duran finds himself almost alone in a fight against a force that threatens to spread sickness and death to the entire country.

The novel has all the elements of a Jaws-style thriller.  Youngman’s efforts are resisted by an ambitious political figure who sees acknowledgement of the threat as bad for business.  We have sections providing a “creature point-of-view” to add to the tension and introduce us to the biology of the animals.  Perhaps most important, we have an obsessed, eccentric hunter — in this case a vampire bat researcher and killer — who aids Youngman in understanding and combating the creatures.

Smith is a talented novelist, however, and manages to use the tropes of the genre effectively as well as transcend them.  The novel as a whole also serves as a commentary on the treatment and exploitation of Native Americans, and the troubled hero of the story is a much deeper character than those that appear in Benchley’s novels.

The best aspect, however, is the ambiguous supernatural aspect of the novel.  In the end, pretty much everything that happens in the story can be explained naturally, but nevertheless Abner’s curse hangs over the story like a deepening shadow.  Depending on tastes, one can interpret the entire book with or without believing in the curse; the ambiguity adds to the unsettling nature of the tale.

Unfortunately, just like Jaws, Smith grossly exaggerates the nature of the danger of vampire bats; as I understand it, they’re more or less harmless, hardly the flesh-ripping threat that the novel portrays.  In fact, baby vampire bats are quite adorable (source): 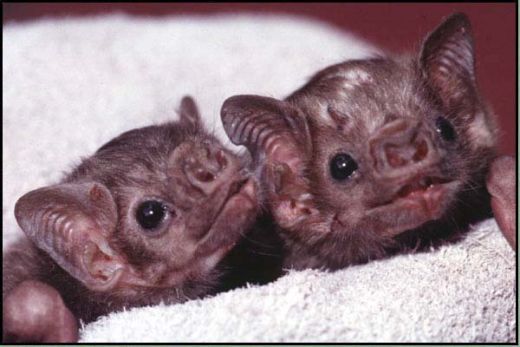 The bats can spread disease, but the ability to spread bubonic plague is also a convenient fiction for the story.

Nevertheless, Nightwing is an enjoyable example of, for lack of a better term, “animal horror” fiction.  It is no longer in print, but is readily available used.

The book was adapted into a 1979 movie that is surprisingly true to the plot of the novel, but is rather ham-handedly done and therefore not very effective.  It does show some brilliance in casting awesome character actor David Warner as the obsessed vampire bat hunter Phillip Payne.  The entire movie can be watched in ten parts on YouTube; part 1 is below:

This entry was posted in Animals, Horror. Bookmark the permalink.