Posted on February 10, 2011 by skullsinthestars

Calculus plays a rather paradoxical role in modern society: much of our modern technology and science depends upon it, but amongst the general public it is feared, even despised, and treated almost as magic.

This is really a problem, as not only do our future physicists and engineers need to know calculus, but ignorance of math amongst the public and policymakers can lead to misinformed opinions and very bad decisions.

Jennifer Ouellette, the author of a number of popular physics books and the great blog Cocktail Party Physics, decided to try and do something about it: she learned calculus herself and wrote a book about it!  This was a remarkable and brave decision, as Jennifer has an admitted “math phobia”.  After a year of learning the concepts, and how they apply to real-world situations, she wrote The Calculus Diaries (2010): 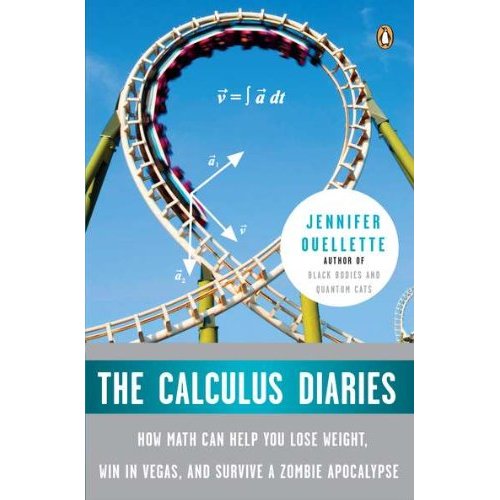 This is not your typical book on mathematics: it doesn’t try and teach the subject to the reader like a textbook would (thankfully), but rather tries to explain the ideas behind it and why those ideas are important in today’s world, and fun!  This makes The Calculus Diaries a great book to give someone an appreciation of the math, or even get them excited about it.

The chapters of the book, appropriate for the title, follow the exploits of Jennifer as she endeavors to learn calculus and apply it to things in her personal experience and other aspects of the real world.  “Drive Me Crazy” chronicles a trip from Los Angeles to Las Vegas with her husband (physicist Sean Carroll) and introduces the ideas of derivatives in the process.  The next chapter, “Casino Royale”, follows the pair as they press their luck gambling in Vegas, and uses it as an opportunity to introduce the concepts of probability theory and calculus.  Other chapters introduce other adventures, including “The Devil’s Playground”, which uses a trip to Disneyland to discuss the application of calculus to the physics of motion, and “Surfin’ Safari”, which introduces the idea of Fourier analysis in the context of catching a wave in Hawaii!  My personal favorite is “A Pox Upon It”, that discusses how calculus can be used to model the spread of disease — including a zombie apocalypse!

The book is filled with tons of charming stories and lots of quirky historical background (including some that I’ll probably use for my weird science facts!).  I found the writing always entertaining and I even learned a bit, even though I’ve known calculus for some 20 years!

The Calculus Diaries focuses the “what” and “why” of calculus, rather than the more difficult “how” (though an appendix provides an introduction to the “how”, as well).  It is perhaps unique in this strategy, and a great read overall.  I’m planning to get a copy to give to a student I’ve been tutoring in calculus this year!

There is one difficulty yet to be overcome, however — how does one convince a math-phobe to read the book in the first place?  I’d love to get my wife to read the book and blog her impressions as well, though she’s been resisting the idea.  I guess we’ll have to wait and see if I’m successful… 🙂

Update: Jennifer appeared on the February 11th episode of the Craig Ferguson show to discuss the book!  You can watch the video here.

This entry was posted in Mathematics, Physics. Bookmark the permalink.