Posted on August 4, 2011 by skullsinthestars

I hadn’t thought about it much before, but secret societies have long been a reliable element in weird fiction of all varieties.   These societies range from the legendary Illuminati to the very real (and less sinister) Freemasons, to fictional organizations of vampires and cults of Cthulhu worshippers.

Why is the idea of such hidden groups so compelling?  I would venture to guess that, in a modern world beset with problems, secret societies give us a simple scapegoat to focus our fear and anger upon.  It is simultaneously terrifying and reassuring to imagine that those really in charge are in fact nefarious and not stupid!

Even more drama arises when multiple secret organizations end up battling it out for world supremacy.  There are as many varieties of conflicts as there are societies: for instance, recent years have brought us werewolves vs. vampires as well as the Priory of Sion vs. Opus Dei.

However, in terms of weirdness, I don’t think anything can beat the conflict featured in Nick Mamatas’ recently released novel, Sensation:

In this very odd and offbeat tale, a chance circumstance thrusts two people into the middle of an ancient conflict that has influenced all of human history — and none of those fighting it are human!

Raymond Hernandez is devastated when his wife Julia leaves him one day with no warning or explanation.  When Julia commits a violent crime in the name of an unclear political cause, Raymond becomes even more confused and frustrated, and seeks to understand what has happened to his former wife.

Little can he imagine that Julia’s dramatic change in character is due to the sting of an insect; in particular, the parasitic wasp Hymenoepimecis sp. (image source):

Julia has been infected by the wasp, and under its influence she begins taking actions to shake up the societal order.  This objective isn’t a coincidence, because society is ruled by Leucauge argyra, super-intelligent spiders that live within the bodies of “men of indeterminate ethnicity” (image source): 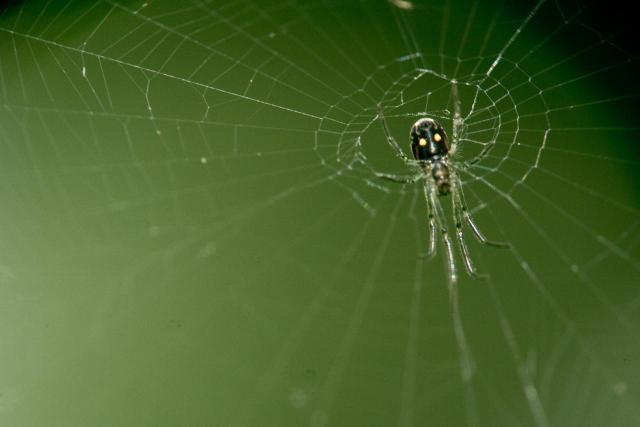 In the natural world, Hymenoepimecis implants one egg on Leucage, and the larvae that develops “zombifies” the spider, forcing it to build a web appropriate for supporting its necessary cocoon.  In Sensation, this natural struggle has led to an ages-old rivalry between the intelligent species, and this rivalry has influenced the development of human civilization.  Julia and Raymond get drawn into this conflict, and inevitably get pushed into the Simulacrum: the spiders’ “world within a world” within which they face being lost utterly.

It’s difficult to really describe what Sensation is about — and I mean that in a good way!  It is impossible to predict where the story is going while reading it.  It is part weird tale, part comedy, and part social commentary.  Grassroots internet activism features prominently in the novel, though it is somewhat pointedly unclear what people are rebelling against at times.

The tale is supplemented with a variety of media.  We are treated to emails, news reports, text messages, personal correspondence, and even police interrogations.  These interludes give the story a very contemporary feel and keep it centered in the modern world.

One weird thought came to me looking back on Sensation after reading it — it vaguely reminds me of the movie Caddyshack!  Both stories feature a conflict between a stuffy, traditional status quo (the spiders in Sensation, Judge Smails in Caddyshack) and unconventional upstarts (the wasps in Sensation, Al Czervik in Caddyshack).  In both stories, it is almost impossible to choose sides in the beginning — both seem equally obnoxious!  Who you root for by the end of the tale depends a lot on your own personality.

Is Sensation for everyone?  I have a feeling it will go over the heads of a lot of people — I’m not entirely certain it didn’t go over my head!  It is, however, an intriguing, unpredictable, utterly unique novel, and I enjoyed reading it.

This entry was posted in Weird fiction. Bookmark the permalink.