Posted on February 15, 2012 by skullsinthestars

This week was an eventful one!  I was at Disney World with my wife, so one of our facts is about roller coaster history.  In honor of the memory of Whitney Houston, I posted a musical fact. For Valentine’s Day, I found an… um… sexual organ related fact…

697. Feb 08: From the annals of weird inventions: rose-colored eyeglasses for chickens!  I learned about these on the reality show Storage Wars, when Barry Weiss came across some in a storage locker he purchased.  The glasses are intended to keep the chickens from cannibalizing each other at the sight of blood.

698. Feb 09: The supersoaker was invented by a rocket scientist! (h/t @MiriamGoldste)

698a. The 1948 Donora industrial smog, which killed 20 and helped spark the clean air movement.  Before this incident, the public seems to have been unaware of the possibility of man-made fatal environmental disaster on a grand scale.

699. Feb 10: Early 1903 looping roller coaster, Flip-Flap Railway, produced 12 G’s and snapped some rider’s necks.  Modern looping coasters have a “clothoid” shape, like an inverted tear drop, with relatively wide curve at the bottom and a sharp curve at top (images via Wikipedia): 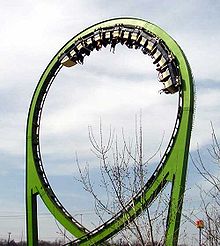 The reason for this is elementary physics: in order for a roller coaster car to successfully clear the top of an ordinary circular loop, such as the Flip-Flap Railway (shown below), the rider must be exposed to incredibly high, even fatal, G-forces at the bottom.  By widening the entrance curve at the bottom of the loop, the forces are reduced to a safe level. 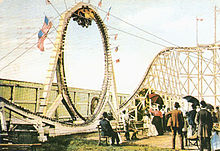 700. Feb 11: The “drawn sound” technique of music synthesis, oramics, invented by Daphne Oram.  “Oramics” involves drawing images on 35mm film as a “mask” of transmitted light; the light is received by photocells that interpret the result as sound.  A picture of such “drawn sound” is shown below (via Wikipedia):

702. Feb 13: The 2008 destruction by the inadvertent draining of Lake Delton.  (One of many videos can be watched here.)

703. Feb 14: “Angel lust”, otherwise known as a “death erection“.  I had known for years about the possibility of a hanged man producing an erection, but I had not until now considered how odd it is from a scientific point of view.  (h/t @arthurpdent42)