How well can the government spy on us via satellite?

About a week ago, NASA announced some really good and unusual news.  The National Reconnaissance Office, in operation of the United States’ spy satellites, had some extra unused “hardware” to donate to the space agency: two Hubble-quality space telescopes, initially designed to spy on the Earth!

The Hubble Space Telescope, image via Wikipedia. Thanks to the NRO, NASA now essentially has two extra ones.

This is undoubtedly a great boon for NASA, which has been suffering under budget cuts for quite some time, even resulting in a recent bake sale by scientists.  It will take years for the new telescopes to be used on a mission, but they could still be launched sooner, and for much cheaper, than comparable projects.

This raised an interesting question on Twitter, posed by Colin Schultz and John Rennie: if they had actually been used as spy satellites, what would these super telescopes have been able to see on the ground?  It’s a fascinating question, and leads into a nice basic discussion of the optical resolution of imaging systems.  In other words, what is the smallest detail that could be picked up by one of these telescopes in orbit?

As a starting point, it’s worth noting that there are typically a number of practical limitations to image-forming systems.  The foremost of these are aberrations, which are distortions in the lenses or mirrors of the system that degrade the quality of the image.  A familiar example of this is astigmatism, which also occurs in the human eye and is mitigated with corrective lenses.  Because a mirror or a lens has to have a very precise curvature to produce an ideal image, bigger imaging optics tend to be more susceptible to aberrations.  The Hubble telescope itself, after deployment in 1990, was found to have an unacceptable degree of spherical aberration; this was fortunately reduced by the use of corrective optics.  (The telescope was, in essence, given eyeglasses!)

Even if we manage to make a system that is completely free of defects, it is still subject to a fundamental limitation: the wave nature of light.  Waves of all kinds, including light, have a tendency to spread as they propagate.  Even highly directional and narrow laser beams will eventually become quite wide; laser beams used to precisely measure the distance from the Earth to the Moon end up 1.5 km wide on the Moon’s surface!

When light is forced through a narrow aperture in an opaque screen, it spreads rapidly on the other side in a non-geometric manner, in a phenomenon known as diffraction.  Roughly speaking, there is an inverse relationship between the size of the aperture and the rate at which the light spreads beyond it; this is illustrated in the pair of simulations below.

In both images, a light wave is normally incident from below onto an opaque screen (blue) with a hole in it.  In the top picture, the hole is one wavelength wide, while on the bottom, the hole is three wavelengths wide.  It can be seen that the light wave spreads rapidly upon emerging from the one wavelength hole, while the wave is spreading much less and is effectively traveling in a narrow column equal to the width of the aperture.  The light emerging from the smaller hole spreads more, and vice versa.

Diffraction also happens in imaging systems.  The cylinder of a telescope “chops off” the edges of an incoming light wave, just like the aperture in the images shown above.  Even if we forego putting our lens/mirror in a cylinder at all, the boundary of said lens/mirror chops off the light wave anyway.  The light that gets focused onto our detector is already spreading as it is being focused.

This spreading results in a fundamental limitation to the performance of any imaging system.  Let us suppose we focus our telescope onto a perfect point-like source of light that is some distance away.  Ideally, we would like the image formed by our telescope to be a point of light as well, but instead we will find that the image of the point source is an extended circle of light, as illustrated below. 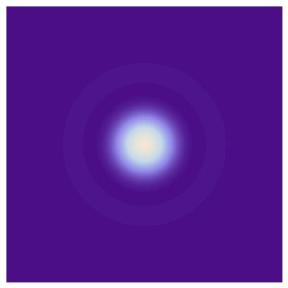 This spot, formed by the diffraction of light at a circular aperture, is known as an Airy disk. This spot consists of a central bright region surrounded by increasingly dimmer rings of light; this can be seen more clearly in a cross-sectional plot of the intensity, as shown below. 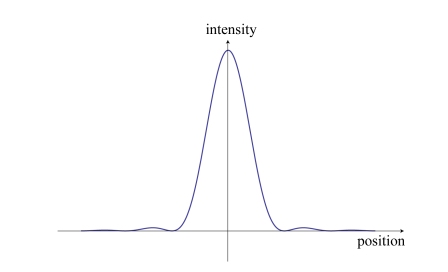 The size of the spot is inversely related to the size of the aperture: a larger aperture results in a smaller spot.  It therefore follows that a good telescope will have a large an aperture as possible, to minimize the spot size.  A large aperture also collects more light, allowing the imaging of fainter objects.

We are now in a position to talk about how diffraction limits the resolution of an imaging system.  Suppose we are interested in imaging two perfect point sources of light (say, two distant stars) that are relatively close together.  If the two points are sufficiently far away from one another, their individual diffraction spots will not overlap and we can clearly distinguish between, or resolve, the two independent sources.

An image of two point sources that are sufficiently far away from one another to be resolved.

If we imagine moving the two point sources closer together, we eventually reach a point where their diffraction spots overlap to an extent that they look more or less like a single object.

An image of two point sources that are separated by one half of the Rayleigh resolution limit (discussed below).

The natural question to ask: what is the closest distance we can put these two point sources and still distinguish them?  The definition of this distance is somewhat subjective, but the physicist Lord Rayleigh came up with the most quoted criterion: two points are barely resolvable when the peak of one spot overlaps the first minimum of the second spot.  This is shown below.

Rayleigh resolution criterion: two objects are barely resolved when the peak of one spot (blue here) corresponds to the first minimum of the other spot (red here).

The dashed line indicates the total intensity of the two spots together.  An image of two Rayleigh-resolved spots would look as shown below.

The image of two points that are barely resolved according to the Rayleigh resolution criterion.

Mathematically, the Rayleigh resolution criterion translates to the following equation:

is the wavelength of the light,

is the diameter of the aperture, and

is the observed angular separation between the two objects.  The latter two parameters are illustrated for a simple telescope below.

Geometry of image formation of distant objects by a lens.

One more observation will be helpful.  We’re really interested in the actual separation of objects that can be resolved, not the angular separation.  A little trigonometry allows us to relate the angle

and the spatial separation of the objects,

Mathematically, it follows that

, but for large enough distances

.  Rayleigh’s resolution criterion then suggests that the minimum separation

at which two objects may be resolved is:

We can now ask the question: how good could the NRO’s “Hubble” satellites resolve objects on the Earth?  The mirror diameter is 94 inches, or

meters.  Visible light has a wavelength of 390 to 750 nanometers; we’ll use

nanometers as an average value.

What do we choose for the height

of the satellite?  The article doesn’t say, but Wikipedia notes that many Earth observation satellites orbit at altitudes of 700-800 km, and “altitudes below 500-600 kilometers are in general avoided, though, because of the significant air-drag at such low altitudes making frequent orbit raising manoeuvres necessary.”  Considering that the U.S. government typically doesn’t care about the cost and effort of things like orbit raising, we can boldly assume an altitude of 500 kilometers.

Putting these numbers together, we find that, according to the Rayleigh criterion, the NRO satellites could potentially resolve objects separated by a distance as small as

That is quite impressive — roughly speaking, two distinct objects on the ground only five inches apart from one another could be distinguished by the telescope!

It is a little harder to estimate what this would imply for distinguishing objects in a complex image like a photograph of the Earth’s surface.  Roughly speaking, every point in such a complex image would be smeared out over a 5 inch diameter circle: on a 5 inch scale, objects would appear blurry.

A system whose primary limitation to resolution is known as a diffraction-limited system.  The diffraction limit for the NRO satellites, according to the Rayleigh criterion, actually seems to fall short of what would be an ideal spy satellite application: identifying people on the ground by facial recognition.  Is there any way to improve on the Rayleigh limit?

In fact, there is!  It should be noted that Rayleigh introduced his criterion around the turn of the 20th century, when there were no computers available to analyze data and the best device available for recording images was the human eye.  Let’s reiterate Rayleigh’s criterion: “two points are barely resolvable when the peak of one spot overlaps the first minimum of the second spot.”

Rayleigh chose a convenient definition for resolution, but it was in fact a rather arbitrary one!  In fact, the English astronomer W.R. Dawes empirically determined a slightly narrower resolution limit than Rayleigh’s.

It is possible to do significantly better than even Dawes’ limit, however, with the advent of image processing software.  Below is an intensity cross-section of a spot formed by two points separated by less than the Rayleigh criterion.

The blurred image of an individual point source is known as the point spread function, because it represents how the light an individual point source spreads in the image.  If we know the point spread function of an imaging device such as a telescope, we can perform a mathematical process known as deconvolution to “unblur” the image and in principle recover a perfect image!

In practice, we can only use deconvolution to improve the resolution of an optical imaging system to a small extent due to the presence of noise in the image.  This noise could be inherent in the optical system or due to atmospheric turbulence.  If I were to conservatively guess, I would say that we could improve the resolution by a factor of 2 over the Rayleigh criterion.  This means that the telescope could potentially have a resolution of

This is quite impressive, and is quite close to a resolution where faces could be recognized.  For those concerned about government surveillance, however, it is worth noting that it would be extremely difficult to improve the resolution further than this.  The only two things we could change to reduce the Rayleigh limit are:

Even if we could improve one of these parameters, the payoff would be limited.  In order to halve the resolution limit by increasing the mirror diameter, we would have to double the mirror diameter.  That would give it a diameter of 4.8 meters; assuming a length comparable to Hubble of 13.2 meters, it would be unable to fit in the space shuttle.

Perhaps the most telling observation is the fact that the NRO is giving away these satellites.  One wonders if laboratory tests of the actual telescopes fell short of expectations; this does not seem like an unreasonable assumption.

Hopefully NASA will have better luck with them; at the very least, they’ve already provided a small scientific payoff by giving me an excuse to talk about image resolution!

18 Responses to How well can the government spy on us via satellite?