Posted on November 16, 2012 by skullsinthestars

I’ve been a fan of the publisher Valancourt Books for almost as long as I’ve been writing this blog (my first post on one of their publications can be read here).  They have done an amazing job reprinting rare and classic literature from the 18th, 19th, and early 20th century, including many novels of horror and weird fiction.  Among these are what are now some of my favorite books!

Over the last couple of years, it seemed that they were slowing down production a bit, but they have recently published a wonderful flood of classic works, including the edited volume “Terrifying Transformations: An Anthology of Victorian Werewolf Fiction, 1838-1896”: 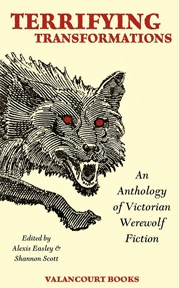 This is a lovely volume, with a great variety of stories.  Fans of werewolf fiction will not only find rare pieces that have hardly appeared anywhere for 100 years, but also learn about the symbolism of the werewolf in Victorian times.

There are 15 werewolf stories in the anthology, ranging from 1838 to 1896.  It includes tales by some of the great authors of the supernatural, including Bram Stoker, Arthur Conan Doyle and Rudyard Kipling.  However, some of the real gems are those stories that were written by those unknown today.

Some of my favorites include:

Perhaps most intriguing to me is the introduction to the volume by Alexis Easley and Shannon Scott.  They point out the prominence of sinister female werewolves in Victorian literature and argue that female werewolves were, in fact, a metaphor for the growing (and threatening) independence of women in society.  I am rather delighted by this, because I have been mulling for some months over a female werewolf story, set in Victorian times… with a theme of woman’s independence!  (I’ll be blogging about this later, when I’ve finished the story.)

It is also interesting in this compilation to see how many different variations on the term “werewolf” there have been: “wer-wolf”, “weir-wolf”, “wehr-wolf”, “were-wolf.”

The book contains a lot of reference material, including original illustrations from a number of the stories as well as appendices with other essays on lycanthropy.

In summary, any fan of classic horror in general or werewolves in particular will find “Terrifying Transformations” a wonderful volume to peruse!