Richard Le Gallienne’s “The Worshipper of the Image” (1899)

I have been arguing for some time that there is much more of a connection between horror  and science than is generally appreciated.  In fact, I explore this relationship in detail on my Tumblr, Science Chamber of Horrors.  Occasionally, however, I find a book like Richard Le Gallienne‘s 1899 The Worshipper of the Image, which dramatically highlights how a macabre event can simultaneously spur tales of horror as well as scientific and medical advances. 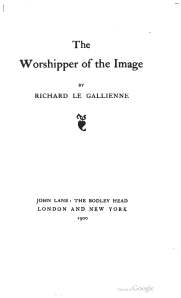 The novel is short, only 143 pages long — I read it in its entirety in bed one night.  It tells the story of a poet named Antony, who falls in love with a beautiful death mask of an unknown woman.  This mask exerts an increasingly negative influence on both Anthony and his family, eventually leading to horrible tragedy.

The novel is a short and enjoyable read, but what makes it really stand out is that the death mask — “Silencieux” — is actually based on a real death mask that became a cultural phenomenon in the early 1900s!  This mask went on to become “the most kissed face of all time,” as I explain below.

The model for the death mask is now known as “L’Inconnue de la Seine” (“The unknown woman of the Seine”) who, according to legend, was pulled dead from the Seine River in Paris in the late 1800s.  The apparent suicide victim was never identified, but a morgue attendant was reportedly so taken with her beauty that he made a death mask of her face. This peaceful, lovely, almost smiling visage was copied numerous times and became a popular fixture in Paris Bohemian society. 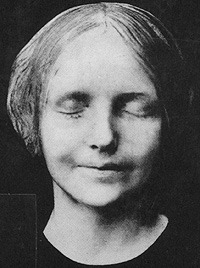 The Worshipper of the Image is the first known work of fiction to be inspired by this compelling and morbid artifact.  Gallienne embellishes the origin story of “Silencieux” to add to its tragic nature:

Beatrice gave the mask back to Antony, with a little shiver.

“It is very wonderful, very strange, but she makes me frightened. What was the story the man told you, Antony?”

“No doubt it was all nonsense,” Antony replied, ” but he said that it was the deathmask of an unknown girl found drowned in the Seine.”

“Drowned in the Seine!” exclaimed Beatrice, growing almost as white as the image.

“Yes! and he said too that the story went that the sculptor who moulded it had fallen so in love with the dead girl, that he had gone mad and drowned himself in the Seine also.”

“I hope so, for it is so beautiful, — and nothing is really beautiful till it has come true.”

“That is a part of the beauty,” surely — the very essence of its beauty —”

“Beauty! beauty! O Antony, that is always your cry. I can only think of the terror, the human anguish. Poor girl—” and she turned again to the image as it lay upon the table, — “see how the hair lies moulded round her ears with the water, and how her eyelashes stick to her cheek — Poor girl.”

“But see how happy she looks. Why should we pity one who can smile like that? See how peaceful she looks;” and with a sudden whim, Antony took the image and set it lying back on a soft cushion in a corner of the couch, at the same time throwing round its neck his black cloak, which he had cast off as he came in.

Antony is undeterred by his wife’s fear of the mask; in fact, he is caught in its spell from his very first glimpse of it in a sculptor’s shop in London:

One day as chance had sent him, picking his way among the orange boxes, the moving farms, and the wig-makers of Covent Garden, he had come upon a sculptor’s shop, oddly crowded in among Cockney carters and decaying vegetables. Faces of Greece and Rome gazed at him suddenly from a broad window, and for a few moments he forsook the motley beauty of modern London for the ordered loveliness of antiquity.

Through white corridors of faces he passed, with the cold breath of classic art upon his cheek, and in the company of the dead who live for ever he was conscious of a contagion of immortality.

Soon in an alcove effaces he grew conscious of a presence. Some one was smiling near him. He turned, and, almost with a start, found that — as he then thought — it was no living thing, but just a plaster cast among the others, that was thus shining, like a star among the dead. A face not ancient, not modern; but a face of yesterday, to-day, and for ever.

As the tale progresses, Silencieux takes on a life of her own, making increasingly horrible demands of her living paramour.

One suspects that English author and poet La Gallienne was being a little autobiographical in his description of Antony’s obsession with the mask.  He owned a copy of the mask, and even dedicated his work “To Silencieux: This tragic fairy tale.”

La Gallienne was not the only one inspired by L’Inconnue’s sad fate.*  In the 1950s, pioneering medical researchers Peter Safar and James Elam got together to devise a method for teaching people cardiopulmonary resuscitation (CPR).  They agreed that a training dummy was the best option, and they collaborated with the Norwegian toymaker Asmund Laerdal to develop the model.  Laerdal decided that the perfect visage for the new doll, now known as Resusci Anne, would be the face of L’Inconnue de la Seine. 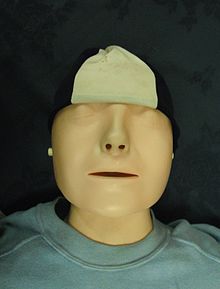 If you have ever taken a CPR course, you have likely come mouth to mouth with the image of the mysterious woman, sometimes known as “the most kissed face of all time.”

However, it is interesting to note that the story of L’Inconnue may not even be true!  There are no original records about the discovery of the drowned woman, and a number of conflicting reports suggest that the mask was taken from a woman who was very alive and well at the time, perhaps even the daughter of the German manufacturer of the masks.

Regardless of the veracity of the story, it lives on and continues to inspire others.  Caitlin R. Kiernan’s excellent 2012 novel The Drowning Girl briefly references L’Inconnue.

And what of The Worshipper of the Image?  It is not a spectacular work of fiction, but it does a reasonably good job of telling a chilling tale of supernatural horror and obsession.

* Borrowing the text from my Science Chamber of Horrors post on the subject.

This entry was posted in History of science, Horror. Bookmark the permalink.