Posted on August 10, 2013 by skullsinthestars

Been very busy with work lately, trying to meet some deadlines before the start of the Fall semester.  In the meantime, I thought I’d say a few words about a few recent Valancourt Books releases that I read on my Kindle.

Valancourt Books, traditionally publishers of early Gothic and Victorian era novels, has recently expanded into 20th century fiction.  Of course, I’ve been involved in these releases myself, writing introductions for a collection of books by John Blackburn (see here and here and here).  I’ve really been enjoying the opportunity to read some forgotten but really wonderful — and often nasty — works of weird fiction of the last century.

One of these is the short story collection of J.B. Priestley, The Other Place (1953).  I’ve previously blogged about Priestley’s really clever and sinister “old dark house” novel Benighted, so I was curious to see what his other weird work was like. 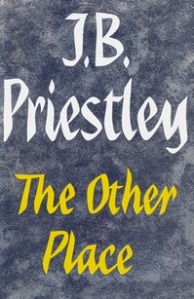 The collection is pretty good, though many of the pieces play out more as vignettes than full-fledged stories.  Also, the stories are not at the same intensity of horror that Benighted had, not that Priestley necessarily intended them to be.  There are nine stories total, including a few that stood out to me:

Ironically, the vignette nature of some of Priestley’s stories have inspired me to write my own versions of them!  The Statues and Mr. Strenberry’s Tale, in particular, leave lots of unfulfilled possibilities in them that I’m planning to explore in my own work.

The other Valancourt Book I read recently is best summarized by a quote from Thomas Hobbes’ Leviathan: “nasty, brutish and short.”  I can think of no better way to describe Stephen Gregory’s 1986 novel The Cormorant, though I definitely mean it in a good way.

When a young writer’s uncle Ian dies, it seems at first to be an incredible boon for him and his family: Ian left him a beautiful country cottage in North Wales.  However, the inheritance comes with a catch: the writer must also take care of the late Uncle Ian’s pet bird, a wild cormorant.

A great cormorant. Looks like a sweet bird, no? This novel will make you change your mind.

The bird is an immediate disruption to the family’s placid life: it is foul, violent, and a genuine threat to the couple’s young son Harry.  They attempt to make the best of the situation, however, and the writer finds himself growing more and more attached to the obnoxious creature.  As its influence grows, however, the danger to the family increases, and there may be something even more sinister pulling the strings of them all.

The novel is short — only 132 pages — but it is unrelenting and horrific.  It is almost certainly not for everyone; hell, I could hardly handle reading it through to the end.

The story is curiously reminiscent of another, much older, novel that I blogged about recently, The Worshipper of the Image (1899).  In both books, an artist becomes more and more obsessed with an unusual object and it tears apart the man’s life and family.  The Cormorant is waaaay more intense than ‘Worshipper, but the similarity in theme is striking.

Any fans of extremely intense and nasty horror will find The Cormorant to their liking! I’m curious to read more of Stephen Gregory’s work now.