Posted on April 17, 2014 by skullsinthestars

Some of the most spectacular physics demonstrations rely on surprisingly simple science.  Throughout history, for instance, very simple optics has been used to great effect to terrify and amaze audiences (see, for instance, Robertson’s Phantasmagoria).  I recently came across such a demonstration on YouTube, and decided to make my own version, as shown below.

I like to call this the “phantom lightbulb illusion” [1].  Its operation can be seen at the end of the video, and described as follows.  A functioning lightbulb is placed in a socket upside-down inside of a box, while an identical socket is empty directly above.  When the bulb is turned on and the box is in the proper place, the concave mirror in front of the box produces a real image that lies directly above it.  As long as one keeps the empty socket between the observer and the mirror, the image will remain in the proper place.

This is, in short, how the illusion works, but doesn’t explain why it works — that is, what is the underlying optics that creates the image in the proper place?

What a great opportunity for me to explain a little bit of geometrical optics!  By the end of this post, I will have described the basic theory of image formation in concave mirrors and, hopefully, we’ll really understand why the “phantom lightbulb illusion” works.

Though we know today that light has both wave-like and particle-like behaviors, these are surprisingly hard to observe without a carefully prepared experimental setup.  For most mundane observations of light, it is sufficient to treat light as a stream of line-like rays that radiate from a source in straight lines that only deviate when they encounter some sort of matter.  This model of light behavior was sufficient to explain most observations for literally thousands of years, and is seen every day.  It can be seen explicitly, for instance, when sunlight peeks through clouds, as shown below. 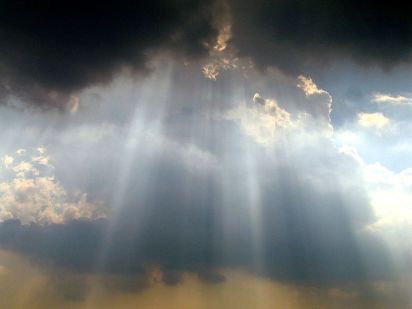 Light rays shining through clouds at the Washington Monument, via user Andypham3000 at Wikipedia.

of a light ray is equal to the angle of incidence

.  In refraction, the light ray changes direction as it enters the transparent medium.

Illustration of the law of reflection.  The dashed line represents the perpendicular to the surface.

Since we’re working with a mirror, we’ll only need to concern ourselves with reflection [2] to explain the “phantom lightbulb.”

For a curved mirror, the law of reflection still holds at every point.  The light ray reflects around the line locally perpendicular to the surface, which is different at every location.  This means that parallel light rays at different heights will bounce off of the mirror at different angles and travel in different directions.  Below, we have an illustration of horizontal rays bouncing off of a spherical mirror. 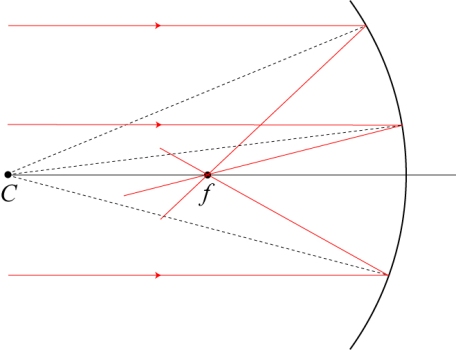 But something else interesting happens: every parallel ray hitting the mirror reflects back and passes through the same point on the mirror’s axis, labeled f.  If we put a lightbulb really, really far away from the mirror, it would produce almost parallel rays and those parallel rays would converge at f, producing a bright spot of light.  This point f is called the focal point of the mirror, and from the picture it can be seen that it is located halfway between the mirror surface and the center of curvature.

We can also imagine taking the picture above and reversing the direction of the arrows.  This reverses the “angles of incidence” and “angles of reflection,” but since those angles are the same, the picture doesn’t change!  In other words, any ray that passes through the focal point on its way to the mirror will be reflected parallel to the horizontal axis.

With just these two rays, we now have enough information to determine the location of any image produced by the concave mirror!  Let us first imagine that we have an object (represented by an arrow) at a distance greater than f from the mirror.  We imagine that light leaves the tip of the arrow from all directions; however, we only follow the two rays that we know how to draw.

What we find is that the light from the object gets refocused into a magnified, inverted image that lies beyond the curvature point C.  The image is known as a real image, as there is actually light passing through the observed image, as the diagram suggests.

We can also consider the other circumstance, when the object lies within the focal distance, but must be a little ingenious.  Unlike the previous case, no ray passes first through the focal point and then hits the mirror; the ray that reflects parallel is the one that, when extended backwards (thick dashed line), hits the focal point.

Another (seeming) complication: our two rays never intersect!  They extend away from each other after hitting the mirror.  However, if we draw imaginary (thin dashed) lines into the mirror itself, we see that they would appear to intersect inside the mirror, forming an upright magnified image.  This is a virtual image — there is no light actually inside the mirror — similar to the virtual images we ordinarily see in a flat mirror.

You can test these properties of a concave lens if you have a concave makeup mirror; such mirrors work well for putting on makeup because of the magnification of the upright virtual image.

Now we come back to our illusion!  Suppose that we place an object exactly under the point C.  Drawing our rays again, we see the following. 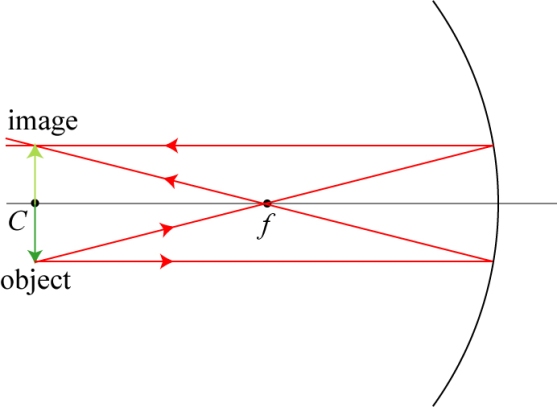 This is the optical physics behind the “phantom lightbulb” illusion — an object placed directly on the center of curvature of a concave lens will produce a real, inverted, unmagnified image at the same location.

There is some additional complexity, however, associated with the simple picture of geometrical optics given here.  If you look at my ray picture of the optical illusion given above, you’ll notice that the rays do not pass directly through the focal point, but instead hit the axis a little to the left.  It turns out that the statement “parallel rays all pass through the focal point” is only an approximation, and an approximation that gets worse for parallel rays more distant from the axis.  This is a phenomenon known as spherical aberration, and is an inherent limitation of spherical mirrors, which are not the best mirrors for focusing and imaging! One can see the problem easily by considering a hemispherical mirror and drawing a ray that hits very high on the mirror’s edge.

The ray hits the mirror’s surface at a glancing angle, and isn’t reflected enough to hit the focal point!  Spherical mirrors are not, in fact, perfect image-forming devices, and the rule that “every parallel ray passes through the focal point” is only an approximate one for rays sufficiently close to the center axis.

I should now confess that I cheated in drawing my earlier pictures!  When I drew all the parallel rays passing right through the focus, I assumed that they did so and drew the picture accordingly.  This approximation is good enough, however, for a basic description and understanding of geometrical optics.

And what better way to end a blog post about an illusion than to admit to a little deception of my own?

[1] I first saw it on YouTube, where it is referred to as the illusion of the famous Chinese magician Foo Ling Yu.  For hopefully obvious reasons, I don’t want to perpetuate a racially-based pun.

[2]  I talk in detail about refraction in an “Optics basics” post, for those wanting to learn more.

This entry was posted in Optics, Physics demos. Bookmark the permalink.