The Lost Skeleton Walks Among Us! (hopefully)

Proving once again that you can’t keep a good undead down, at least not the first or second time, it was recently announced that there will be a third film in the Lost Skeleton of Cadavra (soon-to-be) trilogy!

Being that I am pretty much a floating skull in space (at least in my twitter and blog identity), I’m pretty excited about this development.  The project, which brings back the original cast, including star/writer/director Larry Blamire, is being crowdfunded on Kickstarter this month; the video introduction can be watched on the Kickstarter page.

I’ve already got the giggles just watching the faux documentary A World Without Lost Skeleton included in the Kickstarter video!  I’ve been a big fan of the original 2001 movie The Lost Skeleton of Cadavra and its 2009 sequel, The Lost Skeleton Returns Again, and would love to see the third film get made.*

If you’re familiar with The Lost Skeleton, I probably need say no more; if you’re not, I thought I would give a brief intro to the series, because the films are a total treat!

But there’s more: I managed to score some production art and storyboards from the upcoming film from the promotional team to use in a blog post!  Let’s take a look at the saga of the skeleton…

The original Lost Skeleton of Cadavra is a brilliant parody and tribute to the strange science fiction movies of the 1950s, filled with aliens, mutants, monsters, and “science” in its most generic form.  The trailer gives a taste of the general idea!

The story?  Dr. Paul Armstrong (Larry Blamire) and his wife Betty (Fay Masterton) have traveled to the mountains to look for a meteorite made of the rare element atmosphereum.  At the same time, however, Dr. Roger Fleming (Brian Howe) has traveled to the area to search for the legendary Lost Skeleton of Cadavra… which needs atmosphereum to come back to life because… why not?  Nearby, aliens Kro-Bar (Andrew Parks) and Lattis (Susan McConnell) have landed to refuel their ship with atmosphereum.  When these groups come together, things will happen — including the creation of the oddly-compelling animal-human hybrid Animala (Jennifer Blaire).

The Lost Skeleton is absolutely hilarious, and has a number of scenes that I consider instant classics.**  It works so well because it is played entirely straight — everyone acts with entire sincerity, and the result is a hoot.  The Lost Skeleton him/itself is hilariously rude, and the only character who breaks out of Ed Wood-style dialogue.

Larry Blamire and the other actors reprised their roles in 2009 for The Lost Skeleton Returns Again, which is a sillier movie but also utterly charming, inspired by jungle adventure movies.  This time, a jaded Paul Armstrong is lost in the jungle, in search of another rare but powerful mineral.  Soon there are others on the chase as well, including the Lost Skeleton.  At the end of the trail is not only the prize they seek, but the most horrible monster they could ever imagine!

A weird thing happened while I was watching The Lost Skeleton Returns — I felt genuinely concerned about the characters’ fates!  This is weird, since the plot is (deliberately) nonsensical, and the characters are (deliberately) rather flat.  Nevertheless, the silliness of the story and the awkward sincerity of the players completely won me over.***

This brings us to The Lost Skeleton Returns!  In the third film, Paul and Betty have moved to the suburbs, with neighbors Kro-Bar and Lattis.  Unbeknownst to them, however, the Lost Skeleton has also moved into the neighborhood — and has a sinister plan to reconstitute himself and RULE THE WORLD!

Though left behind in the jungle in the previous film, Animala evidently manages to make her way to the community to cause some mischief.

Animala looks like she’s taken a cargo ship out of the jungle.

When the Lost Skeleton strikes, it looks like the military will get involved, poorly choosing to use a weapon called the “Mybigatron”…

Somehow, the use of the Mybigatron leads to the biggest fight that the Lost Skeleton has waged yet!

It wouldn’t be a “Lost Skeleton” movie without a fight with a mutant.

This movie looks like a lot of fun!  Take a look at the Kickstarter page to learn more.  If you find it interesting, please consider contributing. 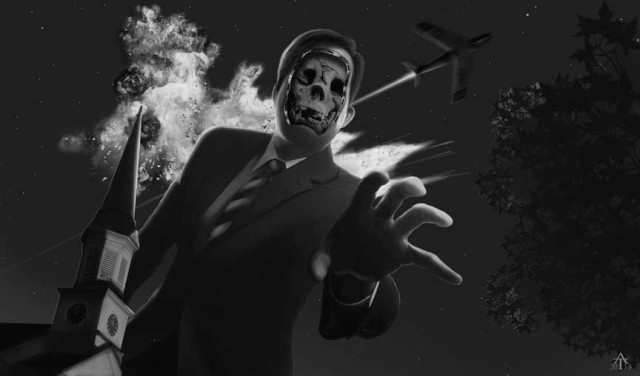 You don’t want the Lost Skeleton angry. You wouldn’t like him when he’s angry. Unfortunately, he’s always angry.

I may have more to say about the project as it continues.  Many thanks to Larry and Adrienne for providing the production art for this post! 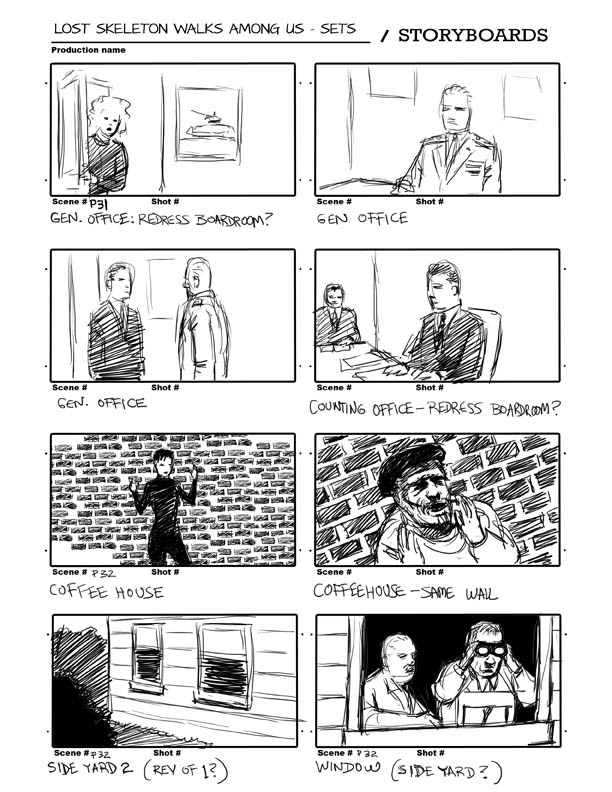 Storyboard from the upcoming “The Lost Skeleton Walks Among Us.”

* Disclaimer: I should admit that I am part of the Lost Skeleton’s army, so I have to promote the film.  Or he’ll punish me.  If you’re wondering, though, I have no other connection to the project, other than wanting to see it!

** No, I’m not gonna tell you which ones, because I don’t want to ruin them.

*** This is in marked contrast to how much I cared about what happened by the end of Indiana Jones and the Kingdom of the Crystal Skull.

This entry was posted in Entertainment, Silliness. Bookmark the permalink.