Posted on March 30, 2016 by skullsinthestars

Here’s another roundup of Twitter #weirdscifacts from the past couple of weeks! Click below to read the list and learn what the heck this thing is. 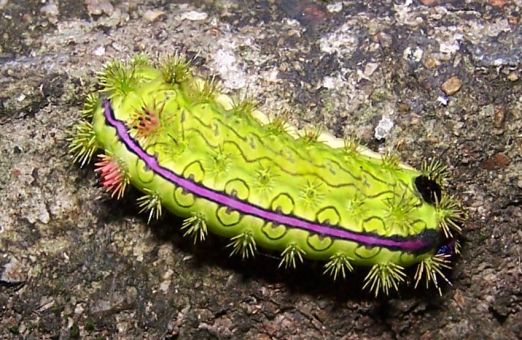 73. (March 14). Great fact for Pi Day: solids of constant width! I own a set of these, and they’re really cool.  In short: it turns out that a sphere is not the only object that has the same width under any orientation when placed between a pair of planes.  With the solids placed between a table and book, you really can’t tell the difference between them and a set of spheres.

74. (March 15).  Ides of March special: Archaeologists may have found exact spot where Julius Caesar was stabbed!  The murder of Caesar has become such an iconic event that it is truly surprising that the location was identified with strong certainty.

75. (March 16). Some warthogs go to mongooses for a spa treatment.  This is a truly peculiar example of inter-species cooperation.  The warthogs get cleaned of parasites, and the mongooses get a free meal.

76. (March 17). Extinct giant ground sloths apparently dug GIANT burrows, for unclear reasons.  Everything was bigger back in the day.  Most people, when thinking of animal burrows, will think of holes a few inches in diameter, not large enough for people to walk in.

78. (March 19). Limacodidae: the moths whose caterpillars look like stinging slugs!  The photo at the top of this post is one of these peculiar caterpillars, which move more by a rolling motion rather than walking.  Their flamboyant appearance is nature’s way of saying “Do NOT touch!”

79. (March 20). Record 8.6 km 1875 balloon trip by chemist Gaston Tissandier left his 2 companions dead.  This is one of my classic history of science blog posts, describing how incredibly dangerous the early years of ballooning were.

80. (March 21). Is it possible to swim in the sand? The sandfish lizard can!  This reminds me of how very common materials can be viewed very differently by creatures of different sizes and shapes.  We see sand as something to walk on, while the sandfish lizard swims on it.  On the other hand, we consider water as a substance one sinks into, while many tiny insects can walk on the surface of a drop of water.

81. (March 22). Do magnetic monopoles exist? You can (sort of) make one in the lab using cloaking technology!  All known magnets in nature have at least two poles: a North pole and a South pole.  If you try and cut a bar magnet in half to separate the poles, you get two magnets, each with its own N and S pole.  But there are good reasons to think that there exist single-poled (monopole) magnets in the universe, though they have not been seen yet.  Using cloaking technology, however, researchers have been able to create a magnetic “wormhole.”  By sticking one pole of a magnet into the wormhole, that pole acts as if it lies on the other side of the hole, creating a monopole at either end. Sort of.

83. (March 24). The most walky walking fish yet!  This is a remarkable new discovery, a fish that only exists in a cave in Thailand.  There have been other fish that kind of walk on land, like the mudskipper, but the waterfall-climbing cave fish features a full-blown pelvis.

84. (March 25). Lightning can be “fossilized”, forming an object known as a fulgurite!  You can buy small sections of fulgurite at rock and mineral shows.  Dealers will actually go out after lightning strikes to dig up the fused soil.  I own a small piece that I have in my office. 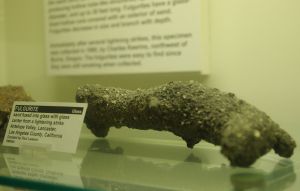 A fulgurite, via Wikipedia.

85. (March 26). The saga of M.L. Humason, who went from mule skinner & janitor to observational astronomer! An outstanding example of an untraditional scientific career path!

86. (March 27). Teletanks: the radio-controlled Soviet tanks used during WWII!  In this era of militarized drones, it’s interesting to see that similar ideas were actually applied on the battlefield some 70 years ago. 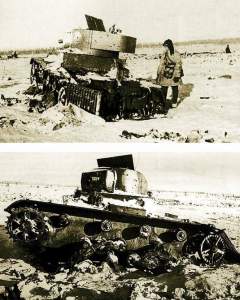 A teletank, via Wikipedia.

87. (March 28). Mathematician Ferrari (d. 1565) is rumored to have died of poisoning via his greedy sister!  Such stories are an interesting reminder that scientists and mathematicians are still human, subject to the same sort of betrayals and misfortunes that the rest of us experience. (Or worse.)

88. (March 29). Photons generated in center of Sun can take thousands of years to escape the surface!  One of my favorite weird science facts!  In essence, the inner regions of the Sun are so dense that photons bounce around like a ball in a gigantic Pachinko machine, and only escape after a long, long time on average. 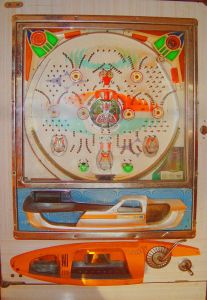 A Pachinko machine, via Wikipedia. If this were the Sun, the balls would take thousands of years to escape through the bottom.

89. (March 30). How subatomic particles need to be turned twice to go all the way around!  This is, of course, the subject of my previous blog post!

Tune in soon for more #weirdscifacts!