Posted on March 29, 2016 by skullsinthestars

Some time ago, I wrote about a fascinating 1975 experiment in which the relationship between quantum mechanics and gravity was tested.  The experiment was made possible by the new — at the time — technique of neutron interferometry, in which the wave properties of matter are exploited to test quantum effects.  The experiment confirmed a very odd theoretical prediction: that the particle-like aspects and the wave-like aspects of matter are effected differently by a gravitational field.  What, exactly, this implies about the nature of the universe is still, as far as I know, unclear!

Not long after this work was done, further investigations using essentially the same neutron interferometer tested, and confirmed, what I consider to be one of the strangest aspects  of quantum mechanics, and another powerful illustration of how the universe obeys really different rules on the atomic scale.

The weirdness in question is connected with the angular momentum of elementary particles such as electrons, protons and neutrons¹.  You may be familiar with ordinary linear momentum, which in classical physics is determined by the velocity (or speed) of a moving object multiplied by its mass.  If we compare the momenta of a car and a truck moving at the same speed, for instance, the truck has larger momentum. 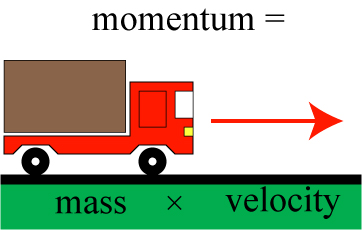 Momentum is conserved in physical interactions, which makes it a useful quantity for understanding physical phenomena.  It is also the reason why you want to avoid being in a car that gets in a head-on collision with a truck: because of the truck’s higher momentum, the car will be affected much worse in the collision.

Of two wheels spinning with the same rotations per minute, the wheel with the highest moment of inertia will have the largest angular momentum.  This is why it is easier to bicycle long distances than rollerblade: the tiny rollerblade wheels have less angular momentum and therefore lose it more quickly than a big bicycle wheel.

Quite illustrative for our purposes is the Earth’s dominant pair of rotations: its orbit around the sun and its rotation about its own axis².

The Earth follows an orbital path around the Sun, but also rotates around its own axis.  The orbital momentum of the former is usually known as orbital angular momentum, while the latter is known as spin angular momentum.

There are a number of fundamental differences between the spin of an “ordinary” object like the Earth and a quantum object like an electron.  First, an electron is a point-like particle: what, exactly, is spinning when the object has no spatial structure?  It turns out that the spin angular momentum of the electron is what we would call inherent: the electron possesses a “built-in” angular momentum not associated with anything physically spinning at all!  If this seems weird to you, all I can say is…

The second aspect of spin is perhaps stranger.  The total spin of an elementary particle is a discrete quantity, meaning that it comes only in integer or half-integer units of the reduced Planck’s constant, “h-bar.”  Every electron, proton, and neutron, for example has a spin of

, while every photon (quantum of light) has a spin of

.  A list of some elementary particles and their spin is shown below. 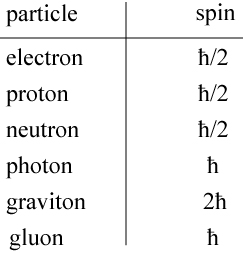 Now here’s where things get really weird.  One of the fundamental aspect of quantum physics is that all particles have wave-like properties.  The wave properties of light were confirmed in the early 1800s; the wave properties of matter were only realized in the early 20th century.  In 1924, Louis de Broglie postulated that electrons must also be waves, and this was confirmed experimentally  in 1927 in the Davisson-Germer experiment (a subject for another post).  Because electrons have wave properties, you can do wave-y things with them, like create diffraction patterns with them and create interference patterns with them.  In 1964, in fact, Claus Jönsson did Young’s double-slit experiment with electrons, and found the characteristic bright-and-dark-band interference pattern, shown below.

The spin of an elementary particle is also part of its overall wave, and it is possible to do interference experiments with the “spin-wave” of the electron.

Here’s where things get weird.

What happens when you rotate an elementary particle around its own axis?  I’ve already said that such elementary particles are effectively point-like, but their wave properties change upon rotation.  It turns out — though we will not prove it here — that the behavior of a particle after rotating it depends upon its spin.

Here we’ll borrow an idea that Stephen Hawking used to explain this in A Brief History of Time.  A spin 1 particle — like the photon — acts a lot like the ace playing card.  In order for it to look the same after rotation, one must rotate it a full 360° around its center, thanks to the big heart in the center.  A spin 2 particle — like the hypothetical graviton, acts like a face card, in that one only needs to rotate it 180° to make it look the same. 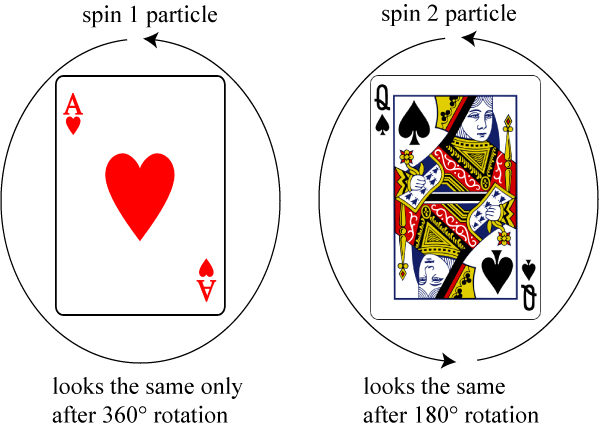 Do you see where we’re going with this?

Spin 1/2 particles like the electron, proton and neutron, which constitute all of ordinary matter, must be rotated 2 times in order to look the same: a full 720°!  This is incredibly bizarre, and there really isn’t anything in the world we experience that is comparable.  The best that I can do is imagine that, when Spock spins in place 360°, he becomes “Mirror Universe Spock.” Only by spinning in place another 360° does he become regular Spock again.

Yes, I made a figure for this.

If this makes absolutely no sense at all to you, I say again…

The strangeness of spin-1/2 particles under rotation is in a sense unavoidable.  Such particles are also known as fermions, and they satisfy the Pauli exclusion principle, which says that no two spin-1/2 particles may be in the same quantum state simultaneously.  Without the Pauli principle, all the electrons in atoms would more or less pile up on top of one another and the entire field of chemistry wouldn’t exist.  So we can say that the weird properties of spin-1/2 particles really go hand-in-hand with the very existence of the world as we know it.

We don’t ordinarily see this weirdness, however, because it is wrapped up in the wave properties of particles.  In order to detect it, we must divide the wave of the particle into two pieces, change one piece of the wave, and then recombine them to make an interference pattern.  This is, in essence, what was done in the neutron experiments of the 1970s!

As we have noted, all matter also has wave properties, if one “looks” at it carefully.  What this means, in practice, is that one must have an experimental device that is sensitive to the wavelength of the matter wave in question.  For “thermal” neutrons — neutrons created in nuclear reactions and then slowed down to about 2,000 meters per second — this wavelength is on the order of 2 angstroms, about the size of a single atom.  In practice, this means that any device used to detect the wave properties of thermal neutrons must be built almost perfectly on the atomic level: even a small number of imperfections in the device can screw up the measurements. In the 1960s, however, material scientists developed a technique to grow large blocks of silicon crystals without any material defects.  Such crystals were fashioned in 1965 into an X-ray interferometer by Bonse and Hart, which is now known as a Bonse and Hart interferometer. 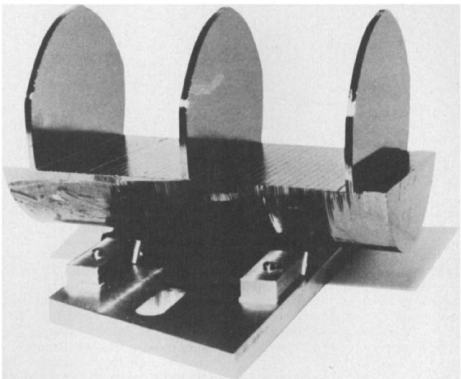 Photograph of a Bonse-Hart interferometer. It is about 9 cm long and 5 cm in diameter.

An X-ray beam — or a neutron beam — hitting one of the planes of crystal will be diffracted by the perfectly arranged rows of silicon atoms, splitting into several beams that are then further diffracted, as illustrated below.

From a wave perspective, the matter wave of a single neutron gets split at A, split again at B, and interferes with itself at C.  If we rotate the spin of the neutron in the diffracted path between A and B, we can see if the “spin around twice to return to normal” prediction holds.

This was done almost simultaneously³ by two independent research groups, who both published their results on October 20, 1975. Because a neutron is, in essence, a “spinning” electric charge, it acts like a tiny loop of electrical current which, in turn, acts like a little bar magnet.  When such a little magnet moves through an external magnetic field, it precesses (in simpler terms, rotates) about the magnetic field, providing the rotation of the neutron of interest.  By varying the strength of the magnetic field, one can change the amount by which the neutron rotates in order to test the prediction that it must rotate twice.  Both research groups used this technique, placing a magnet in the diffracted path, as illustrated below.

The only difference is that Werner et al. used a permanent magnet whose position could be mechanically adjusted to change the magnetic field strength, while Rauch et al. used an electromagnet.  Both verified the rotation prediction for spin-1/2 particles; I show the Rauch et al. result below. 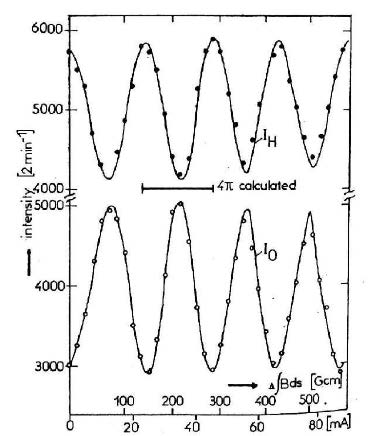 This figure illustrates that the intensity of neutrons measured at the detector varies sinusoidally with the current of the electromagnet.  The horizontal bar shows the predicted 4π — or 720° — rotation distance.  It can see that the interference pattern therefore repeats itself only after the neutron has been rotated by the magnet fully twice around!

These experiments were yet another demonstration that quantum physics is correct, no matter how strange its predictions.

One thing that I wonder about: why did it take so long for these experiments to be done?  The concept of spin in quantum mechanics dates back to 1927, but it took nearly 50 years for the strange rotation properties of spin-1/2 particles to be tested.  One reason for this is clearly that the Bonse-Hart interferometer was not built until the 1960s; why, however, were neutrons required for the experiment?  Why not use electrons, which can have much longer wavelengths and are much easier to produce and manage? I don’t really know the answer, but can make an educated guess. The electron is a charged particle, which means that it interacts much more readily with the environment and could have its wave properties disrupted by other atoms, even in a high vacuum.  The low mass of the electron also means that it is more susceptible to such perturbations.

In any case, this pair of experiments highlight yet another strange and almost paradoxical difference between the world we experience daily and the way nature works on an atomic scale.

¹ Technically, protons and neutrons aren’t “elementary,” as they are made up of quarks.  But this detail doesn’t change any of the points in the post!

² Ignoring subtleties of the tilt of the Earth’s axis, because it isn’t relevant to our discussion.