Posted on April 26, 2016 by skullsinthestars

Even if you don’t know John Wyndham‘s name, you are familiar with his writing.  Wyndham (1903-1969) wrote a number of incredibly famous and influential science fiction novels, including two that have been adapted for screen several times: The Day of the Triffids (1951) and The Midwitch Cuckoos (1957).  One of his other novels, The Kraken Wakes (1953), is in my opinion a neglected classic that has wandered in and out of print and even his last novel, Web (1979), is surprisingly charming.

I recently decided to explore the beginning of his writing career, and I ordered a copy of his second science fiction novel, and third published novel overall, Stowaway to Mars, originally published as Planet Plane (1936) under Wyndham’s pen name John Benyon.

I was really curious to read early Wyndham — would the early work have the same imaginative spark?

… and then the book arrived, and I read the back cover. 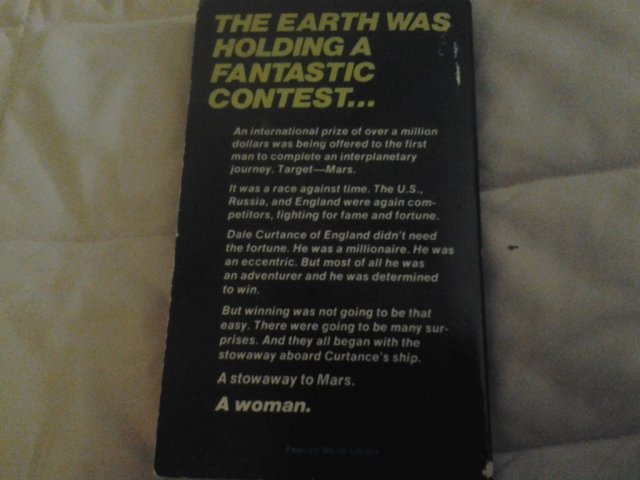 This blurb caused me the greatest intellectual whiplash.  It starts out reading like a vision of 2016 (with its “Ansari X Prize“-esque prize for space travel, and a private space race to Mars) and ends up reading like a nightmare from 1956.  But how sexist would the novel itself be, and could the vision of Wyndham rescue it anyway?

Stowaway to Mars is superficially a standard space opera from the golden age of science fiction, with heroic men doing daring things, fighting off alien creatures and rescuing the damsel in distress.  It even starts off with a bang, as a spy attempting to sabotage Dale Curtance’s rocket project is shot and killed — by Dale himself of course.

Dale is a stereotypical science fiction hero: a handsome, stunningly wealthy daredevil that also happens to be a brilliant engineer and who keeps attempting bolder and bolder rocket journeys to test himself.  In a sign of sexism to come, he ignores the pleas of his wife to settle down and play it safe, even though she’s pregnant, because he is a man and men must do adventurous things.  Though rocketry is used regularly on the future Earth of Stowaway, it is widely considered to be impossible to send a rocketship safely to another planet in the solar system and return, and other earlier attempts have failed, fatally.

Nevertheless, Dale is determined to fly to Mars and plant a flag for England on Martial soil.  He assembles a crew of men — a doctor, a journalist, a navigator, and an engineer — and they set off in the rocketship Gloria Mundi for Mars.  It is not long after takeoff, however, that they discover that a stowaway managed to sneak on board, and this is where the trouble — and the obnoxious sexism — begins.

“Come out of it!” he repeated.

The protruding toe stirred, sending a bunch of charts floating out into the room and revealing a high boot laced to the knee. The stowaway began to wriggle slowly out of the opening, feet first.  The boots were followed by breeches and a jacket of soft leather, and finally, a woe-begone, grimy face.  Dale, after one glance at the disordered hair around it, lowered his pistol.

“Oh, my God, it’s a woman,” he said in a tone of devastating disgust.

It doesn’t get better.  A main plot point throughout the middle of the book, the flight to Mars, is the tension that the mere presence of Joan creates on the spacecraft.  There are constant sexist call-outs among the male crew.  For instance, when she first arrives, there is an apparent serious discussion about whether or not to jettison her into space, even though they have already decided that she does not significantly affect the flight of the craft or the supplies on board.

“Can’t you be serious for a few minutes?”

“Oh, I am.  I’m facing a terrible future which you chaps haven’t thought of yet.  By the time she’s been here a week she’ll be bossing the whole show and making us feel as if we were the supercargo instead of she.  I know ’em.”

You could write up a Bingo card of sexist stereotypes and shout “Bingo!” before the craft even reaches Mars.  Even worse, the tension on the craft results in the men sexually harassing Joan — even the “heroic” captain Dale — and attempted sexual assault becomes a major plot point.

I would completely write the book off at this point, and I started referring to it as “Misogynists in Space.”  However — and I admit this might be wishful thinking on my part — I can’t shake the feeling that Wyndham is punking the reader somewhat.  The character of Joan, despite being horribly condescended to by the other members of the crew, ends up being the most interesting, intelligent, and important character in the story.  Her motivation for sneaking on board the Gloria Mundi turns out to be a quite noble one (though I won’t spoil what it is), and she possesses information that none of the men have — and which turns out to be crucial on Mars itself.

Furthermore, there are snippets of dialogue like the following, in which Joan gives her opinion after a truly epic round of mansplaining, of which I only include the tail end:

“I suppose all that means something,” Dugan said reflectively as Froud stopped.

“Certainly,” agreed the doctor; “it means that men are more interested in machines than women are.”

Froud waved a casual hand. “Oh, go ahead, don’t mind me.  I merely tried to shed a little light on the troubled waters.”

“Speaking as a woman, what did you think of that mouthful?” he asked.

I can’t help wonder if Wyndham is actually mocking male sexism to some degree by giving us a story in which it is shown in an almost cartoonish way?

Okay, I’m probably grasping at straws here, but I’ve felt this way about Wyndhams’ writing before.  In his later novel The Kraken Wakes, aliens take up residence in the deepest parts of the ocean, the only place they can survive.  However, misadventures between the two civilizations leads to war.  Wyndham’s characters themselves opine that conflict is probably inevitable whenever two intelligent species live in close proximity — even though it is clear that they live in mutually exclusive territories.  The aliens cannot live on the land, or even shallow water, and humans cannot live in the ocean depths.  There is no more optimal situation for two intelligent species to live in close proximity and harmony, but they screw it up.  Claims of inevitability in the novel itself aside, I felt that Wyndham was subtly mocking humanity: even in the best circumstances, you screw everything up.  I wonder if he was mocking humanity in Stowaway to Mars, as well?

Misogyny aside, there are some flashes of Wyndham’s science fiction brilliance in Stowaway, though I have to give some spoilers to describe.  Most telling is that Mars is almost entirely populated by intelligent machines, built by the ancestors of the human-like Martians that remain on planet.  The biological Martians are protected by their machines, but are nevertheless slowly going extinct.  Though — and this is the interesting part — they do not view things in that light.  To the Martians, their machine creations are simply the next stage of evolution for their race.  This idea, that one can evolve by creating the species that will replace you, is fascinating, and one that captured my imagination.

Would I recommend reading Stowaway to Mars?  Probably not, for the obnoxious misogyny throughout and the mostly standard space opera fare; the occasional moments of brilliance don’t really justify recommending it broadly.  For those interested in the early writings of a brilliant science fiction author, it can be worthwhile.

This entry was posted in ... the Hell?, Science fiction. Bookmark the permalink.