Posted on January 2, 2009 by skullsinthestars

I’ve  been reading through a number of classic science fiction novels that were adapted into the classic science fiction movies of the 50s and 60s; so far, I’ve tackled John W. Campbell’s Who Goes There? (turned into The Thing From Another World) and John Wyndham’s The Day of the Triffids (adapted into the movie of the same name).  Recently, I decided to tackle yet another Wyndham book, The Midwich Cuckoos (1957): 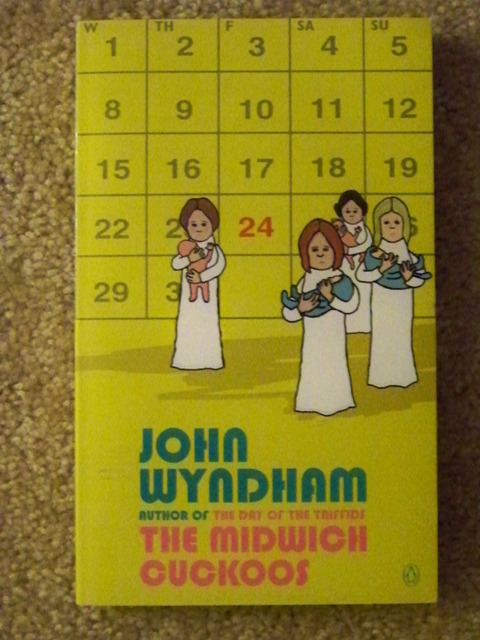 Doesn’t sound familiar?  If not, you’re almost certainly familiar with the title of the movie version: Village of the Damned.  Let’s take a look…

The novel is narrated by Richard Gayford, a resident of Midwich who, by virtue of his connections to the military, is privy to most of the major events which occur in the sleepy village.  One day, without warning, the entire population of Midwich, including animals, fall into a deep sleep.  Investigations by the military reveal that the zone of sleep is a hemispherical region extending some distance into the air.  Planes flying over catch sight of a strange object in town with a shape “not unlike the inverted bowl of a spoon.”

Just as the military operations reach their peak, the mysterious zone vanishes.  Residents and animals awaken more or less fine, with the exception of a few who perished in uncontrolled fires and others who died outside of exposure.  The strange object in town has vanished, as mysteriously as it appeared.  The military is concerned, however, and enlists Gayford to keep an eye on events in town in case the residents need help.

The sleep was just the beginning, however.  Residents quickly learn that all women of childbearing age are pregnant.  The story follows the growing hysteria, and embarrassment, in Midwich, culminating in a town meeting led by Gordon and Angela Zellaby, two of the leading residents, as well as the town doctor and vicar.  Midwich agrees to keep their clearly unusual predicament out of the public eye, for the good of the people.  Much of the novel at this point follows the residents and their struggles to come to terms with their awkward circumstances.

Children are born, both girls and boys, but they are clearly unusual:

‘Most striking are the eyes.  These appear to be quite normal in structure; the iris, however, is, to the best of my knowledge, unique in its colouring, being of a bright, almost fluorescent-looking gold, and is the same shade of gold in all.

‘The hair, noticeably soft and fine, is, as well as I can describe it, of a slightly darkened blond shade. In section, under the microscope, it is almost flat on one side, while the other is an arc; the shape being close to that of a narrow D.  Specimens taken from eight of the babies are precisely similar.  I can find no record of such a hair-type being observed hitherto.’

Their appearance is the least of their abnormalities.  Various mothers, attempting to take their children away from Midwich, find themselves compelled to return.  The childrens’ telepathic abilities grow, and they are able to control people from a distance and read their thoughts.  This power, combined with an awareness of the inferiority of normal humanity and a seemingly greater purpose driving them, leads them into deadly conflict with the villagers.  Eventually the town is held hostage by the super-powered children, and all of humanity is threatened with extinction at the hands of an enemy that can read the minds of its enemies.

The title The Midwich Cuckoos seems rather frivolous compared to the story, but it has a very dark meaning: many species of cuckoo bird engage in what is known as brood parasitism: they lay their eggs in the nest of another bird, who then unknowingly takes care of the invading young.  The novel is, in the end, a unique story of an invasion of earth and an undeniable classic.

There have been two major movie adaptations of the story, both titled Village of the Damned.  The ‘classic’ version was made in 1960, and John Carpenter remade it in 1995 (though I have yet to see the Carpenter version).  The 1960 version is actually quite true to the original, though it is a rather abridged version of the events in the novel.  It can actually be watched in its entirety, in segments, on YouTube.  Part I is linked below:

The movie illustrates nicely the difference in storytelling in novels and film.  Though the climactic event is the same in both versions, it is depicted in very different ways.  In the novel, this important event occurs essentially ‘off-camera’, while it is shown very dramatically in the film, in what I would consider a classic scene.  Both versions, in my opinion, are appropriate for their medium.

The Village of the Damned was parodied quite well in the Simpsons episode, “Wild Barts Can’t Be Broken“, in which Springfield’s kids violate a curfew to go see a drive-in movie called, “The Bloodening”, with creepy, glowing-eyed children reading the minds of adults!

This story really hits home for me, because I have similar problems!   We have mysterious cats wandering our home who seem to be able to impose their will upon us.  I present… Kittens of the Damned! 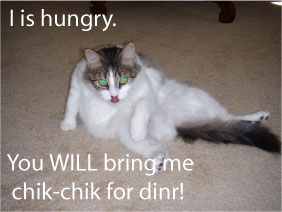 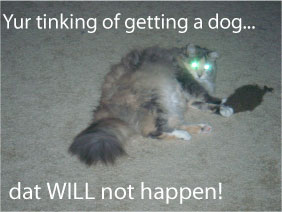