Posted on September 19, 2016 by skullsinthestars

I suspect that most people are unaware of the pivotal role that publisher Arkham House played in the history of weird fiction.  Founded in 1939 by authors and H.P. Lovecraft fans August Derleth and Donald Wandrei, the original goal of the publishing house was to preserve the fiction and legacy of Lovecraft.  It did not take long, however, before they branched out to publishing a wide variety of weird fiction by a variety of authors, often providing the opportunity for many new authors to get established in the field. Arkham House is evidently still in existence today, though they do not seem to be producing much new right now.

I’ve been cultivating a collection of Arkham House hardcover volumes, which are distinguished by their high quality and their often beautiful covers.  Recently, I went on a short buying spree of Arkham classics, and among those I purchased was Kecksies and Other Twilight Tales (1976), by Marjorie Bowen. 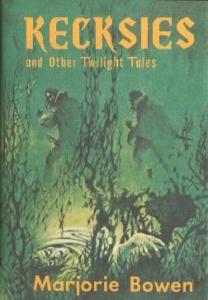 Though published in 1976, the collection was in fact put together in the 1940s, not long after Bowen’s other two collections of “twilight tales”: The Last Bouquet (1933) and The Bishop of Hell (1949).   Of the twelve stories in Kecksies, seven of them come from these earlier volumes.

Before I discuss the stories, I should say a bit about the British-born Marjorie Bowen (1885-1952), starting with the fact that Marjorie Bowen is simply one of several pseudonyms that Mrs. Gabrielle Margaret V[ere] Long née Campbell used during her career.  Her short weird fiction comprises only a small part of her astounding bibliography: from 1906 until her death, she was a prolific writer, penning some 150 volumes, ranging from mystery novels and thrillers to historical romances and popular histories.  As noted by Wikipedia, she adopted a male pseudonym for her very first book because publishers “considered it inappropriate for a young woman to have written such a novel.”  Her work was very successful, and six of her books were made into movies from the 20s through the 40s.

Reading Kecksies, one can see her success was well-earned.  Though, like in many short fiction collections, some stories are more powerful than others, Bowen undeniably has a talent for writing scary and even horrific stories.

A brief synopsis of the stories follows.

As I have said, all the stories in Kecksies are well-written.  Some, like The Sign-Painter and the Crystal Fishes, have a surreal beauty and artistry to them.  Others, like Scoured Silk, are so incredibly horrifying that it is hard to imagine them being written in the 1930s.

For a number of these stories, Bowen taps directly into the horrors that real women would have faced in her era and eras past: abusive husbands, obsessive would-be suitors, and violent jilted lovers. She does not shy away from these horrors, or shield the reader from them; I found them to be quite shocking and effective.

Overall, I found Bowen’s Kecksies to be a potent collection of “twilight tales.” It is well-worth reading for fans of classic ghost stories and horror.

It turns out that I’ve long had a cheap copy of Bowen’s The Bishop of Hell on my shelf that I haven’t gotten around to reading; looks like I’ll have to pull it out, now!