The Hunt for Vulcan, by Thomas Levenson

Posted on September 18, 2016 by skullsinthestars

Some of the most interesting stories in the history of science are those where investigations take a wrong turn.  Scientific progress is filled with red herrings, failed assumptions, and wild guesses that rarely make it into the science textbooks.  When I first started this blog, for instance, I talked about the ridiculous number of atomic models that were proposed before Rutherford finally discovered the atomic nucleus in 1910.

It’s a shame that these stories are often overlooked, because they can often tell us more about how science is done than the famous success stories can.  And, as I said above, these failures are often fascinating, and in the hands of a great writer can be utterly compelling.

I was therefore really excited to read Thomas Levenson’s most recent book, The Hunt for Vulcan (2015): 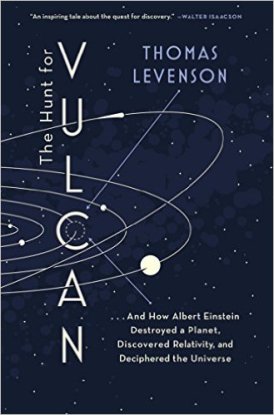 The Hunt for Vulcan tells the curious story of how physicists and astronomers became convinced of the existence of a planet that orbits closer to the Sun than Mercury, a planet that never existed.   The search for Vulcan would eventually lead to one of the greatest scientific discoveries in history: Einstein’s general theory of relativity, which unifies gravity with Einstein’s special theory of relativity and truly transformed our understanding of the universe as a whole.  Along the way, there were personal squabbles among scientists, failed searches, mistaken discoveries, and a World War that altered the course of science.

If this doesn’t sound compelling enough, then you’re probably not familiar with Thomas Levenson’s work! I have previously blogged about his 2009 book Newton and the Counterfeiter, which told the amazing true story of how physicist Isaac Newton basically became a crimefighter after ending his physics career.  That book was a fast-paced and fun read, filled with insights about science, scientists and history that are easily understandable to anyone.

Though The Hunt for Vulcan doesn’t have quite the same action movie-style hook as Newton, it still has the same sense of fun and wonder.  Levenson has a wonderful gift for finding the fascinating aspects of (superficially) very routine scientific research and making the reader feel some of the excitement and anticipation that the researchers themselves must have felt.

He begins the story of Vulcan near the end: Einstein on his way to give a lecture about the motion of the planet Mercury in the context of general relativity.  It was the unusual precession of Mercury’s orbit, which could not be completely accounted for by Newton’s theory of gravity, that lead researchers to postulate the existence of an additional unseen planet.  Levenson then takes us all the way back to Newton’s formulation of the universal law of gravitation, and works forward through the discovery of multiple planets, the Vulcan hypothesis, and then Einstein’s revelation.

This early history is essential in understanding how scientists could be convinced of the existence of a phantom planet!  Planet Neptune had been predicted and discovered on the basis of anomalies in known planetary motions, and the unusual motion of Mercury was therefore expected to arise from a similar unknown planet.  There are rather profound lessons here on the philosophy of scientific discovery, and Levenson teaches them skillfully. I was especially fond of his explanation of how Newton transformed the philosophy of physics. My abbreviated, less elegant take: whereas researchers before Newton were concerned with the “why” of gravity, Newton successfully argued that only understanding “how” it works, through mathematics, is what is important.  The overwhelming success of Newton’s work convinced many that it was, in essence, the complete theory of planetary motion; this created a blind spot in which most scientists never questioned the validity of Newton’s theory: that is, until Einstein appeared.

Like Newton and the Counterfeiter, The Hunt for Vulcan is a relatively short book, weighing in at 182 pages.  As I have said, however, it is filled with fascinating stories and profound insights, and it is an essential read for anyone who is interested in science or its history.

2 Responses to The Hunt for Vulcan, by Thomas Levenson