Posted on November 24, 2017 by skullsinthestars

Sometimes, in science, it turns out that the best way to find something is to not be looking for it at all.

This is more or less what happened in 1891, when an amateur astronomer and full-time insurance actuary observed and correctly interpreted a small anomalous motion of the Earth that other astronomers had been looking for decades, a motion now known at the Chandler wobble.

No, not this sort of Chandler wobble.

This is a fun story of serendipitous scientific discovery, and highlights a little-known movement of the Earth! Let’s take a look at the science and the history of the Chandler wobble.

Most people are familiar with the most significant motions of the Earth: the Earth rotates on its axis every 24 hours, and it orbits the sun every 365 days.  But the direction of the Earth’s rotational axis itself is not fixed: analogous to the behavior of a spinning top or gyroscope, the axis traces out a circular path, known as a precession, with a period of about 26,000 years, and wobbles slightly about that circle, or undergoes a nutation, with a period of 18.6 years. This precession and nutation are driven by the interaction of the Earth with the gravitational forces of the Sun and Moon.

However, another form of nutation was predicted in 1765 by the brilliant mathematician Leonhard Euler, who suggested that the spheroidal (slightly non-spherical) shape of the Earth allows for a free nutation: an additional small wobble of the Earth’s axis with respect to the solid Earth that is self-contained and not induced by external forces.  This wobble arises because the axis that the Earth rotates around is slightly different than the axis of symmetry of the spheroidal Earth, as illustrated below. 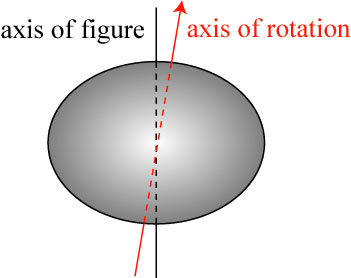 The difference in the orientation of the two axes is highly exaggerated in the figure for clarity.  In reality, the difference is tiny, but the imbalance can result in measurable wobble of the Earth. With some serious mathematical gymnastics, Euler predicted that this free nutation should have a period of 305 days.

A number of astronomers¹ attempted to confirm Euler’s predictions over the next 100 years.  The wobble could in principle be detected by careful measurements of the positions of stars in the sky over an extended period of time: as the Earth wobbles “down” (with respect to the North Pole, say), one would expect to see the apparent latitude of stars move “up,” and vice versa.

An early attempt was made by the famed German mathematician and astronomer Friedrich Wilhelm Bessel in 1842, with no success.  The brilliant James Clerk Maxwell, who theoretically unified electricity, magnetism and light, studied observations of the star Polaris taken from 1851-1854, and found some indication of a variation of latitude, but considered his results to be “doubtful.”  The British astronomer A.M.W. Downing also analyzed measurements of Polaris over the period from 1868 to 1877, and also did not find the ten-month variation that Euler had predicted.   He did notice a variation that seemed roughly annual, but this was easy to discount as an illusion caused by temperature and density variations due to the changing seasons.   By 1884, professional astronomers had more or less given up on the hunt for Euler’s wobble.

Seth Carlo Chandler was not a professional astronomer, and was likely unaware of the wobble controversy.  Born in Boston in 1846, he showed early scientific promise: in his last year of high school, he performed mathematical calculations for Benjamin Pierce of the Harvard College Observatory.  This work earned him an opportunity to work as the assistant to the director of the Longitude Department of the U.S. Coast Survey, where he learned to do very precise astronomical measurements.

Marriage, and the departure of the director to a new job in Argentina,  apparently changed his employment plans, and he left the Coast Survey to become an actuary at a life insurance company.  But he could not give up his stargazing entirely, and it was not long before he became a very active amateur astronomer.

During his time at the Coast Survey, Chandler became very proficient at measuring latitude with a visual zenith telescope (VZT), a telescope designed to look straight up, at the zenith, or very close to it.  However, accurate measurements with such telescopes at the time required careful leveling, using liquid-based levels; Chandler noted that roughly half the time an observer spent working with the VZT was taken up with making it level. 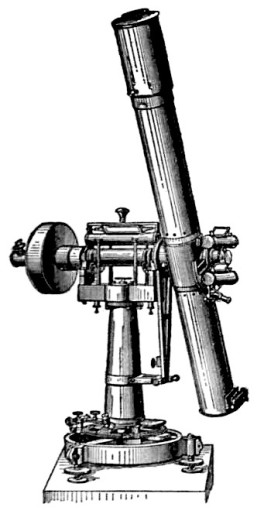 A zenith telescope, circa 1910. Via Wikipedia.

So Chandler’s first major amateur project was the design of a new self-leveling instrument, which he called an Almucantar², along with a new and easier protocol for determining the latitude with it.  But before such a radically new instrument could be put into practical use, it would need extensive testing of its accuracy; from April 1884 to May 1885, Chandler used his Almucantar to make measurements of the latitude at the Harvard Observatory.  He noticed, as others had before him, that the latitude seemed to have a slow cyclic change, but like those before him did not presume that this change was a real effect.

This might have been the end of Chandler’s investigations on the subject, if it were not for a remarkable coincidence and stroke of luck.  Over roughly the same year that Chandler was making his latitude measurements, the German astronomer Friedrich Küstner of the Berlin Observatory was doing the same.  Küstner was not hunting for Euler’s wobble, either, but instead was attempting to make measurements of variations of the speed of light as seen through the phenomenon of stellar aberration.

Karl Friedrich Küstner in 1931, via Wikipedia.

Stellar aberration is the apparent change in the position of stars due to the relative motion of the Earth; I have likened it before to a person walking in a rainstorm.  Even if the rain is falling straight down, a walking person will have to tilt the umbrella forward because, to them, the rain appears to be coming in from an angle. 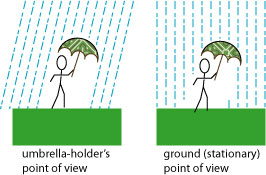 In the days before Einstein’s special theory of relativity convinced people that the speed of light was the same for all observers, it was thought that stellar aberration measurements could be used to detect variations in the speed of light.  Küstner, unsurprisingly in hindsight, found no such variations, and in disappointment he shelved his data for a couple of years.

But then Küstner came across Chandler’s published results on the variation of latitude at Harvard Observatory, and apparently recognized that there might be something real behind those measurements.  He published his own work in 1888; Chandler saw Küstner’s paper and, in turn, was inspired to make more measurements of the latitude on his own.  In 1891, after making many, many more measurements with the Almucantar, Chandler published two papers³ on the variation of latitude, arguing that his measurements indicated that the pole of the Earth must trace a circular path with a radius of about 30 feet over a period of 427 days.  He not only relied on his own work, however; he showed that the data of Küstner was consistent with his own, and demonstrated a real motion of the Earth, and further looked at observations made at the Pulkovo Observatory in Russia and in Washington D.C. and showed that they agreed with this period of 427 days.

How did Chandler discover this variation, and become convinced of its reality, where others had failed?  One key ingredient was the timing of Küstner’s publication, which emboldened Chandler to continue his own work.  The other ingredient, however, was simply that Chandler wasn’t focused on Euler’s 305 day estimate of the period of the wobble!  We have noted that others saw variations in latitude, but because those variations didn’t agree with Euler, they were discounted.  Here, indeed, the fact that Chandler didn’t start out his research hunting for the Euler wobble turned out to be a great advantage.

But why was Euler’s estimate so far off? It ended up being a problem with one of Euler’s assumptions, as the brilliant physicist Simon Newcomb soon explained4:

Astronomers had hesitated to accept the 427-day period, even in face of the very strong evidence of the 1860-1880 observations, owing to the difficulty in accounting for it theoretically.  It had been pointed out by Euler that, treating the Earth as a rigid body, the period of rotation of the pole must be 306 days.  Professor Newcomb, however, happily pointed out that a qualified rigidity (either actual viscosity or the composite character due to the ocean) afforded an explanation of this longer period; and after this suggestion Mr. Chandler’s 427-day period was well and even warmly received.

In short: Euler had assumed the Earth to be a perfectly rigid body; however, the oceans and atmosphere possess enough mass and move around enough to cause a significant change in the period of wobbling.  The exact origins of the delay took quite some time to uncover; in 2000, researcher Richard Gross used computer simulations to estimate that 2/3rds of the wobble comes from deep ocean pressure fluctuations, while 1/3 comes from atmospheric fluctuations.

It is worth noting that this revelation — that a non-rigid Earth can result in unusual motions — led to a very heated argument between two mathematicians in 1895 that, curiously, involved a cat! 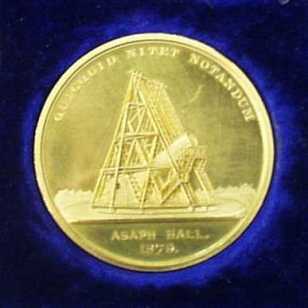 The Gold Medal awarded to Asaph Hall in 1879.

There are still mysteries associated with what is now known as the Chandler wobble. Chandler himself demonstrated that the wobble in fact consists of two combined motions, one with a period of 427 days, the other with a roughly annual period.  This indicated that the amplitude of the wobble would become larger or smaller over a period of seven years, depending on whether the two components of the wobble were moving in the same direction (in phase) or in opposite directions (out of phase).  This prediction has been confirmed, but researchers have also noted that the wobble has had several (relatively) large “jumps” in its behavior; one occurred in 2005.  Similar events happens in the 1920s and 1850s, suggesting that there is another period associated with the Chandler wobble with a period of 70-80 years.  It appears that nobody yet knows the origin of this long-period effect.

Though Chandler was not a professional astronomer, he demonstrated that it is sometimes possible to make contributions to science through very hard work, attention to detail, and very rigorous analysis. In Chandler’s case, it also seems to have helped that he didn’t know what he was looking for when he began his measurements!

Okay, one more of these.

¹ I rely on an excellent article for many of these details: M.S. Carter and W.E. Carter, “Seth Carlo Chandler Jr.: The Discovery of Variation of Latitude,” in Polar Motion: Historical and Scientific Problems (ASP Conference Series, Vol. 208, 2000), 109-119.

² An “almucantar” is a particular geometric circle on the celestial sphere, one which Chandler’s novel device used for measurements.

4 Responses to 1891: Chandler finds a wobble