Optics basics: What is a wave? Part I (updated)

Posted on November 7, 2007 by skullsinthestars

As I’ve mentioned a number of times before, my optics specialty is physical optics, which is the study of the wave properties of light. In order to understand those wave properties, however, it is important to understand what a ‘wave’ is and what it can do. This article is an attempt to answer these questions in a non-technical way for the layperson.

This is not as easy to do as one might think. Most of us are aware of numerous wave phenomena: waves on a string (such as a guitar string), water waves, sound waves (acoustical waves), seismic waves (earthquakes), ‘The Wave’ at football games. There are also many less familiar examples: light waves, particle waves (quantum mechanics), gravitational waves (caused by collapsing stars, for instance). It is quite difficult, however, to explain what these phenomena have in common. Furthermore, as we will see, any definition of a ‘wave’ that we come up with will have exceptions. I suspect most physicists would give a definition of a wave that’s similar to the Potter Stewart definition of hard-core pornography: “I know it when I see it.” We will do the best we can, though, and note those exceptions as they arise.

Here’s my definition of a wave:

There’s a lot of words here, and we’ll try and unpack them one at a time:

First, let’s look at a few examples of ‘a medium’. For water waves, the medium is obviously water. For sound waves, the medium is air. Seismic waves travel in the Earth’s crust. Waves on a string travel in the string itself. We should already note an exception to our definition, however: light waves do not travel in any medium at all, a reality that caused much confusion before the advent of Einstein’s theory of relativity. More on this later…

Let us restrict ourselves to two specific examples of waves for the moment, which are easy to visualize and readily reproducible: waves on a string and water waves. You can play with waves on a string most easily by using a coiled phone cord, such as the one shown below: 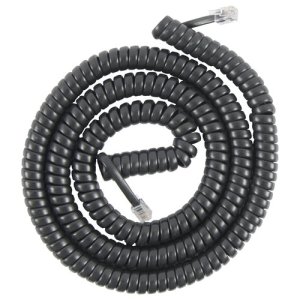 Sadly, in this day of cordless phones, this example is becoming less pedagogical. For water waves, one can visualize waves on the surface of a pond, or waves in a bathtub or sufficiently large bowl.

Every medium we describe has an ‘equilibrium’ state, its behavior at rest when nothing is happening. When we stretch out our phone cord and just let it hang, it is at equilibrium. The water in a pond is at equilibrium when the surface is undisturbed. In both these cases, we can break this equilibrium by moving the medium: we can ‘pluck’ or ‘flick’ the phone cord, and this ‘flick’ travels the length of the cord:

We can also drop a rock into the pond, or otherwise disturb the surface of the pond, causing circular ripples to spread out from the point of impact (image taken from Getty Images):

In both cases, the disturbance is persistent: it does not disappear immediately, but travels away from its point of origin and often, though certainly not always, maintains a consistent shape. The shape of the ‘flick’ on the string doesn’t change as it travels; the circular waves in the pond grow larger but remain circular waves.

In elementary physics, we are often used to describing objects that are localized in space. We pretend that masses and electric charges are pointlike, which simplifies the calculation — we can specify the location of the object by saying it lies at point X. For a wave, which is spread out through an extended region of the medium, we cannot unambiguously describe its location with a single point.

This nonlocal nature of a wave has interesting physical consequences. For instance, in quantum mechanics it is associated with the Heisenberg uncertainty principle. In optics, it means among other things that one must be careful in describing the speed of a wave, especially if it is changing shape as it moves.

One example of a wave that doesn’t carry energy is ‘The Wave’ done by crowds at football games. No energy is transferred from the person who starts the wave to the last person in the wave.

Water flowing in a river or stream is clearly carrying energy, and is an extended disturbance, but is not considered a wave. Why? Because the material medium, i.e. the water, is itself moving downstream. Similarly, a breeze on a gentle spring day is not a wave: the motion of the local atmosphere is the origin of the breeze.

We contrast this with the examples we have just considered. When we flick our phone cord, energy travels to the other end of the cord but overall the cord ends up in the same place it started. This is perhaps the best distinguishing characteristic of wave motion. (We could alternatively ‘transport’ the cord by throwing it down the hall.) Similarly, when we throw a rock into a pool of water, the waves which are created for the most part only move the water up and down — there is no net flow of water away from the rock.

So this is simply our definition of a wave. It is a description that allows us to separate ‘wave-like’ behavior from ‘non-wave’ behavior, so we ‘know it when we see it.’ The next step, to be covered in part II, is to explain more sophisticated properties of waves, namely their interaction with each other (interference) and their interaction with different objects or media (diffraction). I’ll also dedicate a part III to explaining some of the basic parameters used to quantify wave behavior.
Let me conclude with a quotation allegedly from Einstein, who was once asked how radio (which uses electromagnetic waves to communicate) works:

“You see, wire telegraph is a kind of a very, very long cat. You pull his tail in New York and his head is meowing in Los Angeles. Do you understand this? And radio operates exactly the same way: you send signals here, they receive them there. The only difference is that there is no cat.”

Update: I was suspicious of this quotation, and it’s clear that there’s significant doubt that Einstein ever said it.  It’s amusing, though…

This entry was posted in Optics, Optics basics and tagged Optics, waves. Bookmark the permalink.

4 Responses to Optics basics: What is a wave? Part I (updated)