Posted on October 26, 2008 by skullsinthestars

This continues my brief foray into 1950s/1960s horror/science fiction, which I started with John W. Campbell’s Who Goes There?, which was the source for The Thing From Another World and John Carpenter’s The Thing.  Today let’s talk triffids!  A couple of weeks ago I finished reading John Wyndham’s classic apocalyptic novel, The Day of the Triffids (1951), and I thought I’d share some observations about it and how it relates to the science fiction film of the same name. 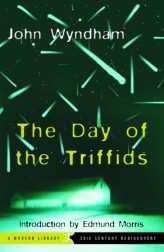 To be honest, I was, until recently, completely ignorant of the fact that The Day of the Triffids had originally been a novel!  When I was a kid, I saw films such as Day of the Triffids (1962) on Sunday morning “creature features”, and it never occurred to me that many of the sci-fi/horror film classics were based on original novels.

To be even more honest, I was an easily frightened child, and Day of the Triffids was, to me, the scariest movie I could imagine: the idea of giant plants taking over the world frightened me terribly!  (Decide for yourself if I was justified: the whole movie can be seen starting here.)

The novel starts with eerie silence:

When a day that you happen to know is Wednesday starts off by sounding like Sunday, there is something seriously wrong somewhere.

Bill Mason, the novel’s protagonist, has been laid up in the hospital with bandages over his eyes.  On the day the bandages are to be removed, he awakens to a sinister stillness in the air.  The night before, a spectacular meteor shower had lit up the sky across the globe, and all who had witnessed the display wake up to permanent blindness.  Unaware of this, at first, Bill gropes his way into the corridor:

“Hey” I shouted.  “I want some breakfast.  Room forty-eight!”

For a moment nothing happened.  Then came voices all shouting together.  It sounded like hundreds of them, and not a word coming through clearly.  It was as though I’d put on a record of crowd noises — and an ill-disposed crowd, at that.  I had a nightmarish flash, wondering whether I had been transferred to a mental home while I was sleeping and that this was not St. Merryn’s Hospital at all.  The sound of those voices simply didn’t sound normal to me.  I closed the door hurriedly on the babel and groped my way back to bed.

Bill works up the courage to remove his bandages himself, and goes out to explore the sights of London, which is paralyzed by the blindness of its inhabitants.  He rather quickly meets another ‘sight survivor’, Josella, and the two of them find their way to what seems to be the last remnant of civilization in town.  Things do not go terribly well, though, and the survivors must contend with the darkness of humanity, as well as the rise of the triffids.

For someone who only recalls the movie version of the story, last seen quite some time ago, I was surprised to find that the existence of the triffids is completely independent of the meteor shower.  In the book, the triffids arrived on the scene long before.  In his personal record, Bill recounts his own childhood, and the year when people started finding these strange new plants growing in their yards.  The plants turn out to be dangerous, with whip-like, poison-laden stalks that can kill a man with a single blow.  Even worse, a triffid can, when fully grown, detach its roots from the ground and become mobile:

When it “walked” it moved rather like a man on crutches.  Two of the blunt “legs” slid forward, then the whole thing lurched as the rear one drew almost level with them, then the two in front slid forward again.  At each “step” the long stem whipped violently back and forth; it gave one a kind of seasick feeling to watch it.  As a method of progress it looked both strenuous and clumsy — faintly reminiscent of young elephants at play.  One felt that if it were to go on lurching for long in that fashion it would be bound to strip all its leaves if it did not actually break its stem.  Nevertheless, ungainly though it looked, it was contriving to cover the ground at something like an average walking pace.

The origin is not completely explained, but it is darkly hinted that biological experimentation gone awry, even bioweapons development, lay at the heart of the mystery.  Nevertheless, once it is found that triffids produced edible oil of a superior nature, they become another crop to be harvested — albeit a crop that must be chained in place and “defanged”.

For sightless humanity, the triffids become a serious threat, and it is unnerving at how quickly the creatures seem to break their bonds once the meteor shower hits.  Bill has an extra advantage against them, having worked as a triffid harvester in his pre-apocalyptic career.

It is interesting to note, though, that the novel is less about the triffids and more about how to rebuild/maintain society in the face of catastrophe.  Bill encounters a number of different groups struggling to rebuild during his travels, and each of them represents a different form of governing.  He finds groups which are feudal, democratic, socialist, and even theocratic.  Much of the story of the novel deals with the failure of a number of these groups, usually linked to their inability to accept the harsh reality of the new world order.

One of the biggest differences between the novel and the movie is the ending.  The movie has an extremely dramatic climax, with some definite resolution to the crisis, while the book is much more open-ended.  It could be said that the book’s ending is even somewhat anti-climactic, though it does tie in extremely well with the rest of the novel and, in my opinion, sums up nicely some of the points that Wyndham was trying to make with the novel.

It’s also worth mentioning that there was a 1981 television series adaptation made by the BBC.

There are a few other Wyndham novels I want to read through, and a few other sci-fi/horror classics, and we’ll get to them in future posts!