A. Merritt’s The Ship of Ishtar

(I’ve been working on a particularly difficult science post for a week now, and the end is still a ways off.  In the meantime, I thought I’d catch up a little on my weird fiction posts.)

Author A. Merritt (1884-1943) was, in a sense, the exception that proves the rule in fiction writing.  Though he was first and foremost a successful journalist and newspaper editor and only wrote weird fiction as a sideline, he was one of the most successful authors such stories of his day.  On this blog, I’ve discussed a number of his works, including his first serialized novel The Moon Pool (1919), the sublimely alien The Metal Monster (1920), Dwellers in the Mirage (1932) and The Face in the Abyss (1923).

Unfortunately, Merritt has been largely neglected in recent years, with the exception of his fantasy adventure novel The Ship of Ishtar (1924), which seems to be considered a classic of the genre.  I put off reading it until the release of the Planet Stories version this past October: 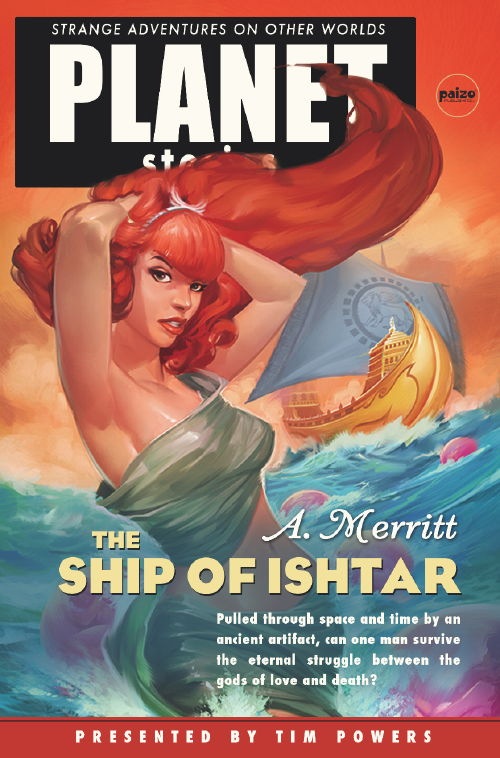 Curiously, though I enjoyed TSOI, I also felt like it had the least to offer of all of Merritt’s books that I’ve read so far.  There were also some rather unenlightened aspects of the story that I found rather unappealing and dated.

The story introduces us to John Kenton, a would-have-been archaeologist whose ambitions were destroyed by the horrors of fighting in the Great War.  Now living adrift in his own home, he receives a package from Professor Forsythe, the researcher of ancient Babylon that Kenton had funded and sent in his stead.  The package contains a large, but curiously lightweight, stone block carved with cuneiform script; Forsythe had kindly sent it to Kenton to study and analyze.

The block contains a secret, however, and Kenton inadvertently breaks it open to reveal what appears to be a model of a Babylonian ship.  The model is itself a portal, and Kenton finds himself drawn to another world and to the deck of the Ship of Ishtar, which has been almost continuously sailing the oceans since the time of ancient Babylon.

The Ship itself is divided into an ivory bow and an ebony stern, with a pit of slave rowers between them.  The light and dark decks are the territories of mortal representatives of the beautiful goddess Ishtar and the evil god Nergal, and these representatives wage eternal battle on behalf of their deities.  Leading the forces of light is the beautiful priestess Sharane, and leading the forces of darkness is the foul and scheming priest Klaneth.

Kenton quickly finds himself caught between the warring factions.  He is instantly enamored of the lovely Sharane, but she believes him to be a spy of Klaneth and banishes him to the ebon deck.  Kenton must use all of his wits, and build up his abilities as a warrior, in order to defeat the forces of evil, win the priestess, and seize control of the ship.

Part of the reason I delayed so long in reading this novel is that it seemed like such a linear and unsurprising storyline: good vs. evil, an obvious love interest and inevitable ending.  I should have given Merritt more credit, however; he introduces a number of other characters and surprising twists to keep the story engaging throughout.  Among the problems that Kenton must face is his occasional, involuntary return to his home world, often at the most inconvenient times!

The story does feel much more conventional than many of Merritt’s other novels.  It does not have the incredible cosmic weirdness of The Metal Monster, the conflicted protagonist of Dwellers in the Mirage or the simple WTF factor of The Face in the Abyss.  TSOI reads very much as a standard swords-and-sorcery fantasy novel, and perhaps it is this accessibility that has made the story his most enduring tale.

As I noted, a  few unenlightened aspects of the novel bugged me; one that jumped out at me was the treatment of slavery.  Kenton is captured and put to work as a slave on the oars of the Ship for a long period of time, suffering under the lash of the whip.  When he finally frees himself and stages an attack on his captors, he refuses to release the other prisoners to help him on his mission — and keeps them as slaves to row the ship under his command.

I’m not sure if it even occurred to Merritt how obnoxious this outcome would appear, but it made me much less sympathetic to Kenton as a character — what kind of hero keeps slaves working under him?

I have to compare this with a similar scene in Robert E. Howard’s Conan novel, The Hour of the Dragon.  Conan, having been press-ganged into service as a slave rower on a galley, leads a revolt with his fellow slaves and seizes control of the ship:

Conan stood on the poop, frowning down at the black men who watched him expectantly.  His heavy brown arms were folded, his black hair, grown long in his wanderings, blew in the wind.  A wilder and more barbaric figure never trod the bridge of a ship, and in this ferocious corsair few of the courtiers of Aquilonia would have recognized their king.

“There’s food in the hold!” he roared.  “Weapons in plenty for you, for this ship carried blades and harness to the Shemites who dwell along the coast.  There are enough of us to work ship, aye, and to fight!   You rowed in chains for the Argossean dogs: will you row as free men for Amra?”

“Then fall to and clean out that waist,” he commanded.  “Free men don’t labor in such filth.  Three of you come with me to break out food from the after-cabin.  By Crom, I’ll pad out your ribs before this cruise is done!”

In Howard’s tales, slavery is a bad thing; in Merritt’s, it is hardly worth considering.  Howard’s sword-and-sorcery, in my opinion, has aged better than Merritt’s in part because of this difference.  Keep in mind, too,  that Conan is supposed to be a savage barbarian, while Kenton is an educated 20th century man!

Merritt’s Kenton is also depressingly primitive-minded towards women.  When he is spurned and cast out by the priestess Sharane, he vows to take her by force:

Now, up to this Kenton’s play with her had been calculated; matchery of her mockery with his own, to dissolve in the acid of her rage that film of contempt for him which, well he knew, still dwelt within her mind; but now he spoke with wratch as real and hot as hers.

He thrust a clenched, chained hand out to her.

“Master of this ship I’ll be, and with no help from you — you who have called me liar and slave and now would throw me butcher’s pay.  No! When I master this ship it will be by my own hand.  And that same hand shall master– you!”

Again, let me note that Kenton is supposed to be a 20th century, educated archaeologist!

In comparing Merritt’s Kenton with Howard’s Conan, Conan again comes out looking better.  With one very dramatic exception I can think of (and that is a story for another post), Conan deliberately and often overtly requires a woman’s consent.

These flaws in The Ship of Ishtar are not fatal ones; I think their palatability will depend on the reader, which is why I mention them here.  In the end, TSOI is an enjoyable, though not exceptional, tale of sword-and-sorcery.  It is not the novel of Merritt’s that I would most recommend, but it is a good introduction to his storytelling.

2 Responses to A. Merritt’s The Ship of Ishtar