Posted on August 2, 2010 by skullsinthestars

One of my goals in blogging has been to run a series of posts covering the “basics” of optics, namely those concepts that form the basis of an understanding of the more advanced topics investigated by researchers today. Though I’ve done a pretty good job so far, I recently realized that I’ve left out a discussion of the most important tool of the optical scientist, and one of the most important technological advances of the modern era: the laser!

Image via Wikipedia, of an experiment at the Air Force Research Lab.

“Laser” is an acronym for “Light Amplification by Stimulated Emission of Radiation”, and it refers to a device that produces light by an unusual physical process not typically found in nature.

In fact, 2010 marks the 50th anniversary of the laser, as the first functioning device was built in 1960 by Theodore H. Maiman at Hughes Research Laboratories in California.  To draw attention to this anniversary, optics organizations have instituted a yearlong celebration called LaserFest, and many special events are planned and have already taken place; my favorite being the Lasers Rock! concert that was held in May at the CLEO/QELS conference: 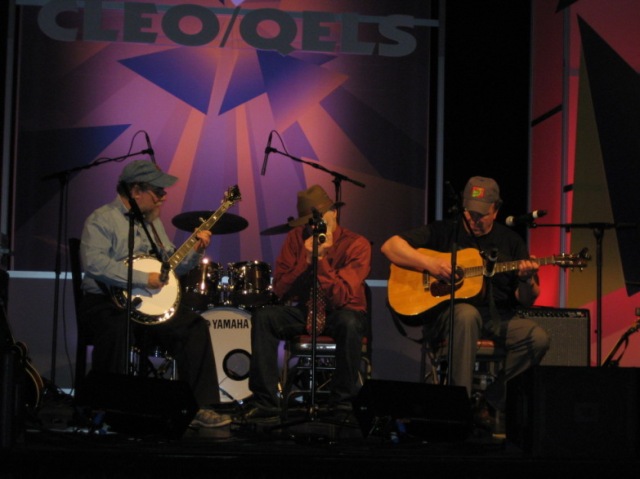 I hardly need to describe the impact lasers have had on our society, and it is hardly possible to list all of the applications!  Among other things, lasers are used to read CDs, DVDs and Blu-ray discs, they form the basis of the fiber-optic communications systems by which you are probably reading this post, they are used in medicine both to diagnose problems as well as to perform laser surgery, they are used to cut material in industrial fabrication.  Their properties make them ideal for doing optics research of all sorts, and they are now an essential tool for researchers.

In this post I would like to describe the physics of lasers.  This is no mean feat, because there is a lot to say about how they work, and many variations on the fundamental idea that was first proposed by Charles Townes in the 1950s¹.  I will proceed somewhat carefully:

We can immediately see the advantage of a laser by considering how Young’s interference experiment would be done before the laser.  Young himself did his experiment using the brightest source of light he had available, namely the Sun.  However, because sunlight is only spatially coherent over a very small area, he needed to block most of the light coming to his experiment and only allow light from a very small hole to illuminate his experiment:

Only a relatively small trickle of light passes through the hole in the collimating screen, and only a small fraction of that light passes through the double slit screen and arrives at the measurement screen.  But the light is broadband (multi-color), so the interference pattern seen on the measurement screen ends up being a rainbow-esque array of colors.  If we wanted to see a single bright/dark interference pattern, of the form,

we would also need to filter the sunlight passing through the collimating screen, which would attenuate the amount of light available for our experiment ever further.  With a laser, however, we would already have filtered, coherent, directional light, and will be able to see a very bright interference pattern.  If we want to demonstrate wave optics effects or apply them to a problem, a laser is a far, far better source of light than any conventional source.

The physics of the laser. So what is the origin of this unusual source of light?  To understand it, we need to understand a little about atoms and how they absorb/emit light.

One of the most important early results of the era of quantum mechanics was the 1913 Bohr model of the atom and its implications for light/matter interactions.  By that time, it had been known for a century that atoms emit/absorb light only at very distinct, characteristic frequencies.  Researchers of the late 1800s/early 1900s bent over backwards trying to explain this observation using known physics, but the real explanation required a leap into the new and inexplicable.

Part of this model is the suggestion that an atom can only absorb/release energy into light “all at once”, in the form of a light particle (photon).  When the electron goes from a higher energy state

to a lower energy state

of the photon is simply equal to the energy released:

is Planck’s constant.  Using this model, Bohr was able to explain the observed discrete energy levels of the hydrogen atom, and initiated the quantum theory of matter.

We can graphically describe this relationship between the energy levels of hydrogen and the emitted photons by an energy level diagram such as the one that follows, from ThinkQuest:

The horizontal lines represent the energy levels of hydrogen, while the vertical arrows represent the transition of the electron from a higher energy state to a lower energy state with the release of  a photon.  The process of the absorption of light works in reverse — the absorption of a photon of wavelength 121.57 nm, for instance, will coincide with a transition of the atom from the

level of the atom.  The

state is known as the ground state of the atom; it is the lowest energy state that the electron, and hence the atom, can be in.  We can draw energy level diagrams for other atoms and molecules that are of a similar nature — albeit much, much more complicated.

The ordinary process of atomic emission is known as spontaneous emission: an atom in an excited state will, eventually, spontaneously emit a photon and drop to a lower energy state.  We have also noted that an atom can also absorb a photon of the proper frequency, raising the atom to a higher energy state.

It was noted by none other than Albert Einstein that a third possibility must exist — it must also be possible for a passing photon to interact with an already excited atom and cause the atom to emit its own photon!  This process is what is known as stimulated emission.  The three processes are illustrated using energy levels below: 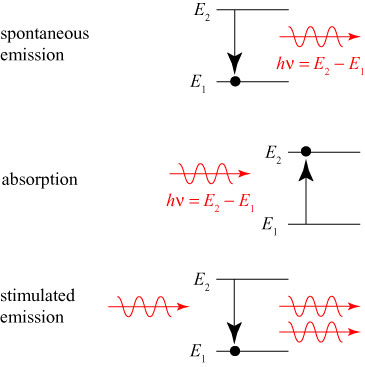 Ordinary light sources are, in essence, a collection of atoms that are excited thermally or electrically and radiate via spontaneous emission.  Because the atoms are radiating independently, the light goes in all directions and has a low spatial coherence.

The light radiated by stimulated emission is of a radically different character.  The photon released in the process ends up traveling in the same direction as the stimulating photon, and is in essence the two photons are duplicates of one another.  This raises an interesting possibility — if each of the two photons leaving the atom in stimulated emission stimulate other atoms to emit, and the process continues, we will have a veritable “avalanche” of photons, all pretty much identical to one another: 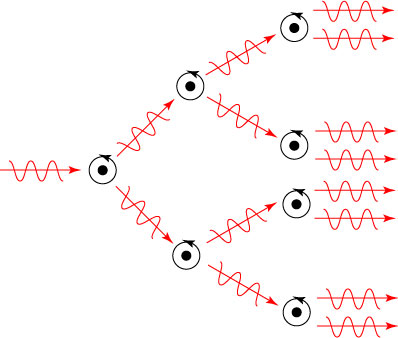 This is the basic physics behind the operation of the laser — if we have enough atoms in the excited state, we can generate a massive flood of photons all traveling in the same direction and otherwise behaving identically!

Imagine that we try to create a population inversion by starting with a bunch of atoms in the ground state and excite them with a beam of light of the appropriate frequency.  At first, most photons will be absorbed by the atoms and transition to their excited state; however, as more and more atoms get excited, it becomes more and more likely that a photon will instead “kick” an atom back into the ground state.  Roughly speaking, when 50% of the atoms have been excited, a photon is just as likely to knock an atom back into the ground state as it is to pump an atom into the excited state.  It would seem, using this simple strategy, that it is impossible to get more atoms in the excited state than exist in the ground state.

However, there are more than two energy levels in any atom or molecule!  (Refer again to the hydrogen energy level diagram above.)  Suppose we simultaneously consider three atomic energy levels, as shown below:

We further suppose that such a 3-level atom that is excited to level 3 very quickly decays to level 2, but the atom takes a relatively long time to decay back to the ground state, level 1.  If we excite a collection of these atoms to level 3 using a light beam at frequency

, they will drop to level 2 too fast to be de-excited by the light beam!  Any atoms still in level 1 can then be also excited to level 3, and so on.  By this process, we end up with most of the atoms continually in level 2, and almost no atoms in level 1: we have achieved population inversion!

Clearly, not just any 3 or 4 levels of an atom will work — only certain energy levels of certain materials possess the right energy level structure to make population inversion.  However, there has been enough research done through the years that an amazing variety of materials have been used as the basis of a laser: solids, liquids and gases alike.

The components of a laser. A laser is more than stimulated emission — a number of components are required to make a laser beam with all the desirable characteristics we introduced above.  In fact, the “avalanche” of photons we described above is a distinct phenomenon with its own name, amplified spontaneous emission: an initial photon created by spontaneous emission produces many more photons by inducing stimulated emission in excited atoms.

So what makes a laser? In simplified form, a true laser consists of four components, listed and illustrated below:

The cavity is a fundamental component in producing the directionality and the monochromaticity of a laser.  Because the mirrors are nearly parallel to one another, photons that are traveling perpendicular to the mirrors stay the longest in the cavity and therefore produce the most amplification: 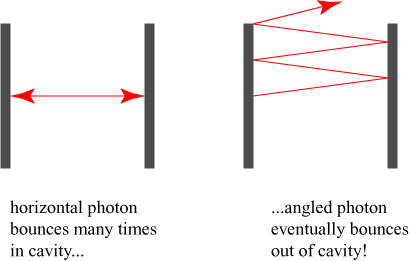 The result is that the perpendicularly-traveling photons get the most amplification, and the light beam that comes out of the laser cavity consists primarily of these single-direction photons!

The cavity also acts as a Fabry-Perot cavity, which I’ve discussed previously.  Only waves of certain wavelengths, and hence frequencies, will constructively interfere outside of the cavity: 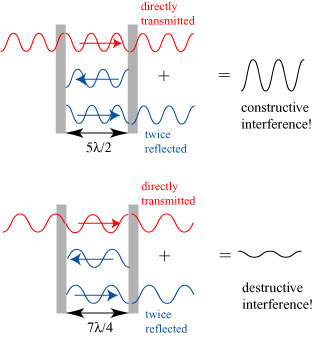 Because the cavity restricts the output light to lie within certain very narrow frequency ranges, the output is very monochromatic.

These are the components that make up a “standard” laser.  It is to be noted, however, that scientists and engineers have changed any and all of them to produce a variety of different effects.  A discussion of these changes, and their effects, takes us well outside of the “basics” level of this post!

¹ The idea of the laser was sufficiently “out there”, in fact, that the idea met with a lot of resistance!  I heard a talk by Charles Townes, the visionary who conceived of the idea of the LASER and its microwave analogue, the MASER, a few years ago.  Townes described how he discussed his idea with many of the geniuses of his time, and was told by most of them, “It can’t work!”  (Some of them later came back to him and said, “Hey, you might be right.”)  Also, the paper describing the first operating LASER, by Theodore Maiman, was actually rejected by Physical Review Letters!

This entry was posted in Optics, Optics basics. Bookmark the permalink.