Posted on August 26, 2015 by skullsinthestars

It’s nice to see Robert McCammon return to writing weird horror novels!  From the late 1970s to the early 1990s, McCammon was one of the best writers of the dark and weird out there; some time ago I blogged about how magnificent his 1991 novel Boy’s Life is.  In 1998, however, he effectively retired from writing, due to an interest in focusing on his family life and frustrations with the publishing industry.  When he returned to writing in 2002, he worked on an excellent series of historical novels, starting with Speaks the Nightbird.

In 2013, McCammon made a foray back into horror, with the fun western vampire novella  I Travel by Night (which I was going to blog about but forgot for some reason).  This May, he released his first full horror novel in over 20 years, The Border. 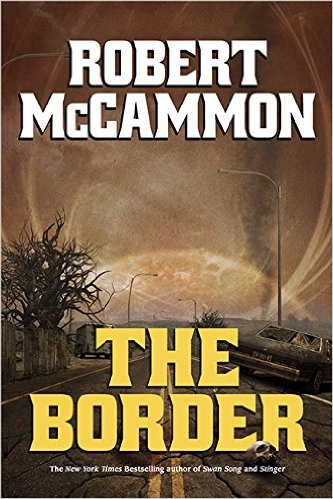 The Border is McCammon’s take on the alien invasion story, and it manages to balance on the (often fuzzy) edge between science fiction and horror.

Set in contemporary times, The Border is set on an Earth that is already almost completely wiped clean of life.  Several years earlier, the world was invaded by two warring extradimensional factions: the Cyphers, who can wink in and out of phase with the world like ghosts, and the Gorgons, who have impossible flying ships made of flesh and the ability to create living weapons out of any inorganic matter.  The armies of humanity stood no chance again the invaders, and in fact were of little interest.  The Cyphers and the Gorgons simply view Earth as contested territory in an age-old dispute.

Though the planet has been scarred by conflict and poisoned by the fallout from toxic weaponry, some humans remain and fight to survive against all hope.  As the novel begins, a new survivor is discovered: a teenage boy who has lost his memory, and only remembers that his name is Ethan.  Though he initially checks out as human (and horrible creatures have infiltrated the human camp in disguise in the past), he begins to exhibit strange abilities.  First, he somehow senses the location of a new, fresh source of water underground.  Later, when the camp is attacked by corrupted, cannibalistic former humans known as Grey Men, he repels them by creating a massive, localized earthquake.  Ethan holds incredible power within him, perhaps enough to turn the tide against the invaders, if his frail and injured body can survive it.  When he begins to have visions leading him to a distant location, the survivors must decide whether Ethan is a friend — or an even more terrible new foe.

The Border is a very dark story, featuring humanity on the verge of extinction.  It is an interesting take on the traditional science fiction war story, focusing on characters who are often overlooked: the civilians caught in the middle of the fighting.  I was reminded a bit of Jeff VanderMeer’s Finch, which looked at humans struggling to get by in a city occupied by a truly ghastly alien force. In The Border, the secret of Ethan’s powers is also a somewhat different take on the traditional characters in alien war stories, and I found the revelation reasonably satisfying.

The Border feels like a story in which McCammon is giving his imagination a workout, exploring alien technologies so advanced as to seem like magic.  To his credit, he really captures the alien-ness quite well, and there were a number of scenes where I felt genuine awe — at least as much as one can feel while reading.

The novel bears a certain structural similarity to one of McCammon’s classic novels, Swan Song (1987), which also features a post-apocalyptic world with survivors struggling to survive.  In both stories, there are “good” humans fighting a greater evil, and “collaborators” working with that evil.  In both stories, the heroes end up on a quest to a mysterious location, and there is even a striking similarity between the destinations in each novel.  However, Swan Song is a supernatural tale, and The Border is definitely science fiction.

The only issue I have with the book is that everything is wrapped up quite quickly in the end, and it feels just a little unsatisfying.  I still enjoyed the ending, but would have liked a little more exploration of the implications of the final act.  This didn’t detract from the impact of the novel, however, and I found myself thinking about parts of it days later.

Overall, I would really recommend The Border.  Though he is talented enough to write in any and every field of literature, it is really great to see McCammon back in horror!

This entry was posted in Horror, Science fiction. Bookmark the permalink.