The first in a (hopefully) series of posts inspired by topics covered in my upcoming textbook on singular optics.

Crewed balloon rides have a surprisingly large role in the history of science.  The first untethered balloon flight was performed in Paris on November 21, 1783, and the achievement of human flight opened up new possibilities for scientific measurement and, indeed, exploration.

Primarily, ballooning offered a novel opportunity to study the chemical properties of the upper atmosphere and the wind currents at high altitudes, and it filled this role for over a century.  Unfortunately, many early flights were deadly: I’ve blogged before about the fateful 1875 flight of Gaston Tissandier, Joseph Croce-Spinelli and Théodore Sivel, in which 2 of the 3 balloonists succumbed to oxygen deprivation.

Other discoveries awaited the adventurous at high altitudes.  Half of the 1936 Nobel Prize in Physics went to Victor Francis Hess for the discovery of extraterrestrial radiation (cosmic rays) from a balloon in 1913 (though hints of cosmic rays appeared even earlier).

In the 21st century, one wouldn’t think that there would be any physics left to be observed by balloon.  Recently, however, I came across a 2002 paper¹ by scientists from Hungary and Switzerland, titled “First observation of the fourth neutral polarization point in the atmosphere.”  In this paper, the researchers describe how they used measurements from a hot air balloon to verify a prediction of optical science that had remained untested for over 150 years! 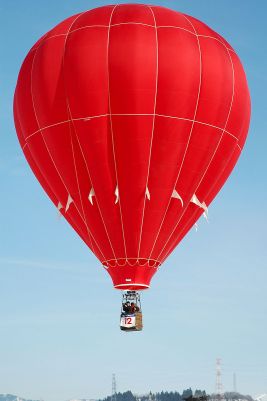 A modern hot air balloon, from Wikipedia, because it seems like I should have one in this post. Photo by Kropsoq.

The discovery is not, admittedly, Earth-shattering, so to speak, but it is a fascinating epilogue to an extended period of the history of physics and a testament to the ingenuity of scientists!

As the paper title suggests, the observation made is related to the polarization of light, a concept which we briefly review.   Since the early 1800s, we have known that light is a transverse electromagnetic wave.  That is: what we know as “light” is really a combined electric field E and magnetic field H, and that these fields “wave” back and forth in a direction perpendicular (transverse) to the direction the wave is going.  We illustrate this as shown below.

For visible light, these back and forth “wiggles” of the electric field are much too fast to directly observe: they are roughly a million billion wiggles per second!  If we were able to see them, however, and we looked at the wave head-on, we would see that the electric field can oscillate in a number of distinct ways, as pictured below.

For linear polarization, the electric field strength moves back and forth: it can be horizontal, vertical, or any angle in between.  Light can also be circularly polarized, in which case the direction of the electric field moves in a circular path.  The most general case is elliptical polarization, in which the light follows a clockwise or counter-clockwise elliptical path (this ellipse can be oriented in any direction, as well).

The fourth case, unpolarized light, requires a bit more explanation.  Most sources of light may be viewed as a large collection of atoms independently radiating their own light waves: this includes the sun, stars, and light bulbs.  Because each atom is “doing its own thing,” the net polarization of the combination of light waves fluctuates randomly; sometimes it is horizontally polarized, sometimes vertically, sometimes somewhere in between.    These fluctuations also happen much too quickly for us to see, so we say that the light is roughly an equal mixture of horizontal and vertical polarization.

Many sunglasses are polarized, and are designed to allow vertical polarization to pass while blocking horizontal.

For unpolarized light, it doesn’t matter which way you orient the polarizer (or sunglasses): it will block 50% of the light.

With this in mind, you might expect that daylight is unpolarized, considering that the light is coming from, well, the sun, which is an unpolarized light source.  However, this turns out not to be true, as I’ve shown in a previous post!

In general, daylight has a definite polarization; a polarizer will transmit more light in one orientation than another.  The reason for this is that the light of the blue sky does not come directly from the sun: it scatters off of molecules in the atmosphere before reaching the ground.

The scattering of light may be roughly thought of as a three-stage process. The first step is the electric field of a light wave striking the charged particles, like electrons, that make up atoms and molecules.  The electric field makes these electrons oscillate; an oscillating charged particle, however, produces its own oscillating electric field, which we call the scattered field.  The illuminating light wave therefore gets scattered through the interaction with matter. Pretty much all interactions between light and matter can be roughly described by this process.

For our purposes, the most important aspect of this process is that the scattered electric field must oscillate in the same direction that the electron oscillates.  In the picture above, because the electron is oscillating up and down, the electric field must oscillate up and down. This means that no light gets scattered along the line that the electron is oscillating.  The consequences of this is shown in the illustration below: when unpolarized light hits an atom or molecule, the scattered light ends up being polarized, with the state of polarization depending on which way you’re looking!  Light scattered vertically will be horizontally polarized, while light scattered horizontally will be vertically polarized.

We can now talk about the implications of this for sunlight in the atmosphere.  Consider the picture shown below, where the black sphere represents the Earth and the large sphere surrounding it is an exaggerated scale atmosphere.

But if one were to map the orientation of the polarization in a region around the sun, what would it look like?  A little reasoning indicates that it must look from Earth something as shown below.

The lines of polarization form circles around the sun; the light from the sun itself is, as we have said, unpolarized.

Are there any other points in the sky that are unpolarized?  A little more thought suggests that, if the Earth were not present, the point in the sky exactly opposite of the sun on the “atmosphere-sphere” must also be unpolarized.  This point is usually called the anti-sun point, and the polarization lines should form circles around it as well.

The aforementioned arguments seem reasonable, but in fact they are a bit oversimplified.  Light typically doesn’t just scatter off of one atom or molecule on its trip from the sun to the Earth: it scatters off of many.  The result is that the unpolarized points at the sun and the anti-sun in fact split into pairs of unpolarized points (called neutral points), which lie above and below the sun and anti-sun at angles of roughly 15-20°.  Three of these points were first observed in the 1800s.  In 1809, François Arago observed the point that lies above the anti-sun, which is now known as the Arago point.  In 1840, French physicist Jaques Babinet discovered the point that lies above the sun, which was named the Babinet point after him.  Based on symmetry arguments, Scottish physicist David Brewster predicted that a third neutral point must lie below the sun; it was observed in 1842, and is, of course, called the Brewster point.

Symmetry also suggests that there should be a fourth neutral point, which lies below the anti-sun; it is often called the second Brewster point.  However, this one cannot be observed from the ground, as the following figure illustrates.

It’s a bit tricky to show the polarization on a sphere, so here we have mapped the lines of polarization from the sphere into the plane.  The area inside the circle represents the sky that can be seen from a position on the Earth, while the region outside the circle represents the non-visible sky.  The figure potentially shows a situation just before sunset, where the sun, flanked by the Brewster and Babinet points, is about to fall below the blue circle horizon.

But the second Brewster point can’t be seen at all from the ground!  It can only be seen when the sun is below the horizon, but of course there is no daylight to be seen, and no polarization to be measured, after the sun has set.  Because of this, the fourth point, though reasonably expected to exist, remained unmeasured for some 150 years.

Which brings us back to the balloon! If one goes to a higher altitude, the horizon is farther away: in the figure above, the blue circle basically becomes bigger. In such a case, it is possible to have the sun and anti-sun — and the related neutral points — all visible at once.

The description of the experimental methods in the paper is quite charming, as it provides great detail on the two balloon flights that were used to perform the observations. A sample:

We conducted two flights with a hot air balloon of the Hungarian Airlines Aero Club (MALEV, Budapest).  The operational ceiling of hot air balloons without oxygen masks for the crew is 4000 mm above the ground level.  The flights were performed on June 28 (local sunrise at 04:52 = local summer time = UTC + 2; crew: Attila Bakos, Balázs Bernáth, Gábor Horváth, Bence Suhai) and August 25 (local sunrise at 05:56; crew: A. Bakos, András Barta, B. Bernáth, G. Horváth) 2001.  In both cases the balloon was launched before the local sunrise from the immediate vicinity of the Hungarian town Pákozd.

During the first flight the balloon drifted slowly southeast and landed in the immediate vicinity of the town Adony (47°06′ N, 18°51′ E), while during the second flight the balloon hovered approximately above Pákozd owing to calm weather conditions at the relatively low (below 1400 m) altitudes of this flight.

An image of Pákozd, from Google maps, is shown below.  It is a perfect rural area to launch a balloon from.

Taking measurements with four people in the balloon gondola was no easy feat, considering the cramped conditions within.  The polarimeter was hung from the outside of the gondola, and the crew had to go through some extreme contortions to take measurements:

A lot of work, in a tight space at a high altitude!  But the effort paid off: the fourth neutral point was observed exactly where it was predicted to occur, and its properties matched well with the three already-seen points.

You might wonder why this neutral point wasn’t observed long before, considering that air travel has been around for even longer than the theory of the neutral points.  The researchers give a number of reasons why in their paper: in short, the measurements are harder than they sound, and many previous measurements of polarization from altitude weren’t using the proper equipment under the proper atmospheric circumstances.

As I have said, the result is not revolutionary, as scientists already fully expected the fourth neutral point to exist.  But it is really nice to see its properties measured experimentally, and the research shows that hot air balloons aren’t necessarily finished as a scientific tool!

P.S. I can speak from experience about how cramped a hot air balloon can be!  Some eight years ago, I did a skydive out of a hot air balloon, and got video of it.  Trying to move around and crawl out of a balloon gondola is pretty darn hard.

This entry was posted in Optics, Physics. Bookmark the permalink.