Dr. SkySkull in Amsterdam: Optics in the Rijksmuseum

Posted on July 2, 2017 by skullsinthestars

The lower level of the Rijksmuseum, an area relatively few time-strapped visitors manage to visit, is reserved for more practical forms of art: musical instruments, ceramics, ship figureheads, weapons, and the like.  I explored this whole area on my recent whirlwind tour of the Rijksmuseum and was delighted to find something I wasn’t expecting: optics-based art!  The museum contains an excellent and diverse collection of magic lantern slides, as well as an optical art form that I had never heard about before, called a diaphanorama.  I spent a good 10 minutes photographing everything I could in the exhibit, probably looking like a weirdo in the process, and would like to share those photographs and a few words about the optics and history here.

Diaphanoramas are three-dimensional scenes painted on glass.  The depth in the image comes from painting on both sides of multiple panes of glass, with the most distant objects on the glass in the back.  The image below is an example of a diaphanorama from the Rijksmuseum, which the museum claims is c. 1750-1830. 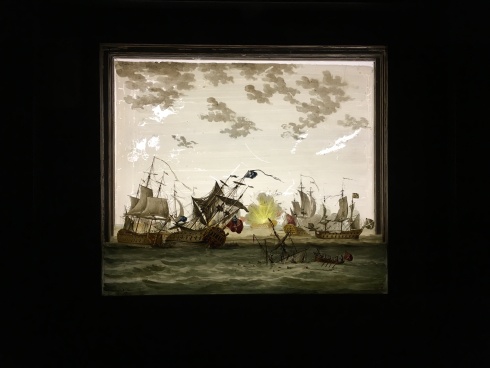 It is hard, however, to appreciate the purpose of a diaphanorama without being able to look at it from multiple angles!  I therefore put together this short video showing what they look like when one changes perspective.

There is surprisingly little information about the diaphanorama available online: as of this posting, Wikipedia does not even contain a stub article about them.  The word may be, however, simply an archaic form of the word “diorama.” From what I have been able to glean: the idea was invented, or at least given its name and popularized, by Swiss artist Franz Niklaus König.  König, who specialized in landscape paintings, used the technique to convey a good sense of depth in the images.  The original diaphanoramas were apparently painted on transparent paper; it is unknown when glass became the medium for work.  Kõnig wrote about his work in an 1832 book, which I may return to and try and translate later.

Even more impressive than the diophanoramas, however, is the collection of magic lanterns slides at the Rijksmuseum.  A magic lantern is, in short, an early slide projector, which exploded in popularity as a form of entertainment through the work of Dutch scientist Christiaan Huygens in the mid-1600s.  Their development followed the creation of the telescope and the microscope, as these scientific devices led to an awareness of the image-forming capabilities of lenses.

An 18th century example of a magic lantern from the Rijksmuseum is shown below. 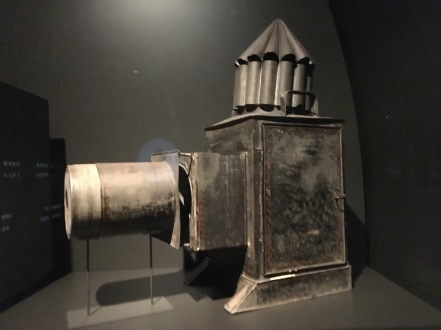 A series of slides could be used to tell stories, teach lessons, or generally amuse people.  The Rijksmuseum has a large selection of original slides lining the walls; I share a few illustrative examples.

Spooky scenes of death and ghosts were quite common. 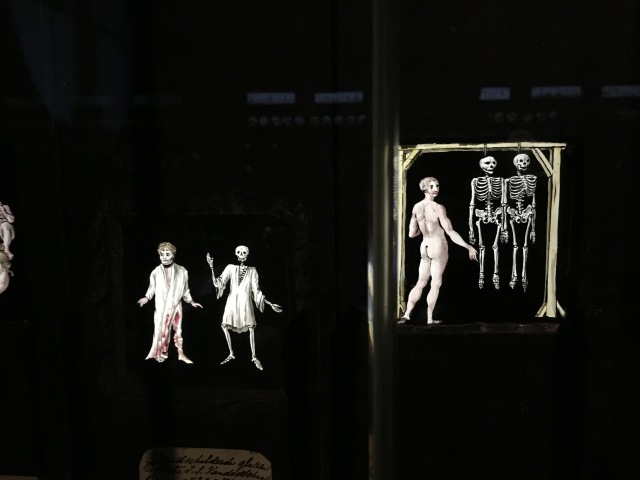 Myths and legends were quite popular subjects; the first slide here is evidently Perseus with the head of Medusa, while the second slide shows Hercules slaying the hydra.

Somewhat ribald scenes also regularly appear; I can only imagine that this was used for comedy.

Some scenes were either related to medicine or outright pornographic; I have no idea what’s going on in the middle image below.

A number of caricatures are found in the Rijksmuseum collection; I imagine they are lampooning popular figures of their time.

This photograph of butterfly slides ended up blurry, but I include it anyway for the lovely art.

The following slide looks like images of snowflakes, though it could also be simple geometric art.

This last collection looks like illustrations of self-defense techniques.

Magic lanterns would remain a popular form of entertainment all the way to the beginning of the 20th century and the advent of motion pictures.  They probably reached their ultimate effectiveness in the early 1800s shows by Etienne-Gaspard Robert that were known as “phantasmagoria.” Robert employed a sophisticated set of lantern projections, combined with sound effects and other atmospheric tricks, to terrify his audiences.

If you have time while visiting the Rijksmuseum, I encourage you to stop by and visit this fascinating hidden bit of history! 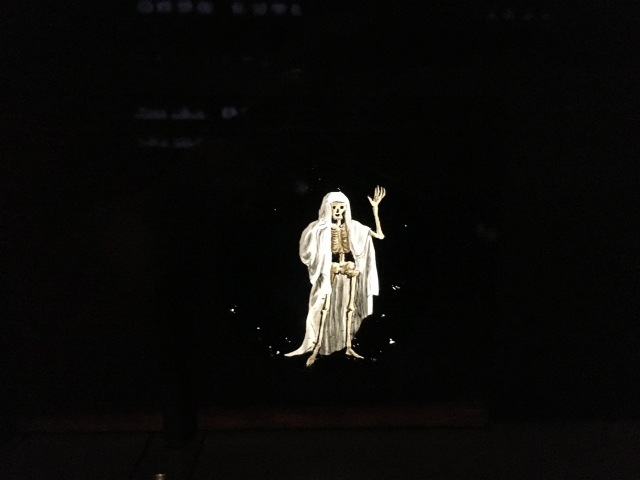 I will probably use this slide as my twitter avatar this Halloween.

This entry was posted in Entertainment, History of science, Optics, Travel. Bookmark the permalink.

2 Responses to Dr. SkySkull in Amsterdam: Optics in the Rijksmuseum