10 years of Skulls in the Stars

Posted on August 14, 2017 by skullsinthestars

I’ve been traveling a bit again lately and been rather busy with work, so I haven’t had much time to blog.  I wanted to acknowledge, however, a rather significant milestone of this site: today officially marks the ten year anniversary of Skulls in the Stars.

Sadly, I got some potentially bad news in my personal life today, as well, so I am still not super-motivated to write, but it seemed wrong to not acknowledge such a big date.  I started Skulls in the Stars on August 14, 2007, with my first post, “Educate or Bust,” whose title was taken from one of Robert E. Howard’s very obscure stories.  The blog title itself comes from Robert E. Howard’s work: Howard is best known for being the creator of Conan, but my favorite stories of his feature a fanatical and justice-driven Puritan named Solomon Kane.  As I describe on my “about” page, “Skulls in the Stars” is a story in which Kane must go against his own black-and-white ethical code to end the threat of a creature of darkness. This idea — that sometimes reality is more complicated than our ideas can accommodate — seemed like a good guiding theme for my musings on life, fiction, and science.  Robert E. Howard himself, by all accounts, seems to have been a kind man with a strong sense of justice, and was significantly ahead of his time on many social issues.

I was inspired to start blogging back in the day by the writings of bloggers and eventual friends Blake Stacey and P.Z. Myers, who showed me how fun and interesting writing about science can be. At the start, I wrote the blog pseudonymously, as I was a relatively new untenured professor and was unsure whether I would continue this work or not.  By the time I was up for tenure, I was happy to add my blog work to my official tenure package, and it was well-received by the administration!  I am no longer really pseudonymous, but I keep the name “Dr. SkySkull” as a pen name anyway.

To commemorate the anniversary, I thought I would briefly share a few of my favorite posts from over the years: a cross-section of my evolution as a blogger, with a few comments about each.

The gallery of failed atomic models, 1903-1913 (May 27, 2008). This is one of my very first history of science blog posts, and set my career on a very different trajectory. I used Google translate to painstakingly translate original manuscripts charting the early history of atomic theory, when many people had imaginative guesses as to the structure of the atom, all wrong.  This post is some of my roughest writing, but I am proud of all the effort I put into it.  I still use the descriptions of atomic models in physics talks I give.

The Discoverie of Witchcraft, by Reginald Scot (1584) (September 22, 2009).  The history of science can sometimes be inspiring, and I never expected to be surprised by a book on witchcraft written before “science” was even really a thing. Reginald Scot wrote a passionate and multi-pronged attack on the belief of witches and a defense of those innocents accused of witchery, and it is an amazing and even beautiful book.  Ironically, I probably had it on my shelf, unread, for at least a decade before writing this post. I bought it on a visit to Salem many years before.

Mythbustin’: 1808 edition (the incombustible man) (April 18, 2010).  Many of my history of science discoveries came from a simple strategy: methodically working my way, month by month, through a scientific journal over a period of decades.  One fascinating story I came across: a period in which scientists struggled to explain how certain entertainers seemed to be impervious to fire!  The answer turns out to be much simpler than the scientists imagined, as Harry Houdini would later show. (One historian of science commented that this post was practically another PhD thesis, which I took as the ultimate compliment.)

Attack of the giant squid! (1874) (August 4, 2010). In one of my journal wanderings, I found and blogged a short account of an observation of a giant squid, which led to one of my scicomm friends to ask if I had ever come across the famous account of a fisherman fighting for his life against a giant squid!  I took up the challenge, and found the original scientific descriptions of the encounter, which ended up being the “official” introduction of the giant squid to science.  It is an incredible and dramatic story, and one that was fun to write about.

Benjamin Franklin shocks the world! (1752) (October 15, 2010).  Sometimes the true story turns out to be even more interesting than the simple legends that have been passed down.  Everyone knows the story of how Benjamin Franklin flew a kite in a thunderstorm to prove something about electricity; to write this post, I delved into a large number of original sources to figure out, as accurately possible, what really happened.

Madness on canvas: art in horror fiction (February 7, 2011). The only post on this list that isn’t history of science! I used to write more broad literary surveys of horror fiction, and this one was my favorite: a discussion of how artwork features in horror, interspersed with classic works of art that have an element of the macabre in them.

The Saga of the Scientific Swindler! (1884-1891) (February 24, 2011).  This post was an incidental, and incredible discovery: a nearly two-decade-long con game run by a single man against some of the most famous paleontologists in the United States at the time, chronicled in the pages of scientific journals!  This was also, I believe, my first post that really exploded on the internet, thanks to the fact that it was shared on multiple popular sites.  It was the first time this story was told, though coincidentally another author independently discovered it and wrote about it not long after.

The secret molecular life of soap bubbles (1913) (May 16, 2012).  There are some truly mind-boggling scientific demonstrations that have been lost to history.  This usually happens because, in the grand scheme of things, the demonstrations are not of fundamental importance; nevertheless, they are often incredible and beautiful.  In this case, French physicist Perrin demonstrated how one can use the colors of ordinary soap bubbles to deduce the size of individual soap molecules!

April 10, 1815: Mount Tambora blows up (April 10, 2013). Mount Tambora was the largest volcanic eruption in modern history, but one that is relatively poorly documented due to the pre-telegraph era in which it happened.  I managed to track down the only eyewitness accounts recorded of the event, and showed geographically the effects of the eruption at various distances from the epicenter.

Paris: City of lights and cosmic rays (October 9, 2014).  This post originally appeared as a Scientific American guest blog post in 2010, but in 2014 I tweaked it a bit and added it to my own blog, as the original link no longer worked.  This is another fascinating story, largely unknown, about how a Jesuit priest found the first evidence for cosmic radiation while working at the top of the Eiffel Tower! The history of the Tower and cosmic rays are intertwined in a fascinating way.

Marguerite O’Loghlin Crowe steps from the shadows (November 30, 2015).  This post is a great illustration of how the internet can be a wonderful place to share and grow the knowledge of humanity. Years ago, I had written about a then-mysterious woman student of famed physicist Albert Michelson.  In 2015, I was contacted by her grand-niece, who graciously provided key information about Marguerite and the important and amazing work that she did.

Dircks and Pepper: A Tale of Two Ghosts (December 20, 2016).  One of my more recent posts, here I attempted to clear up who, exactly, was the inventor of the illusion known as “Pepper’s Ghost.” As is often the case, the answer is nontrivial, and from it we can learn lessons about how scientific and technological discoveries are attributed.  In this post we are also treated to a fascinating look at legal issues surrounding new forms of entertainment in the 19th century!

I have written, of course, many other posts, historical and otherwise, over the course of these past ten years. Here’s hoping that I have many more years of writing and discovery to follow. 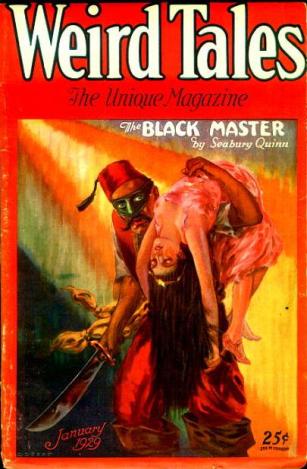 The January, 1929, issue of Weird Tales in which “Skulls in the Stars” first appeared.

This entry was posted in History of science, Personal. Bookmark the permalink.

1 Response to 10 years of Skulls in the Stars