Posted on January 7, 2020 by skullsinthestars

In case you’re not tired yet of hearing about my book on Falling Felines and Fundamental Physics, I wrote a post for BBC Science Focus Magazine about the falling cat phenomenon, which you can read here.  A sample of the article:

With the recognition of conservation of energy, physicists soon decided that a cat simply cannot flip over on its own in freefall once it begins falling. The consensus view was that a cat, at the moment it begins to fall, must push off of its perch to give itself some initial rotation that leads to it ending on its feet. The cat generates its angular momentum by imparting the opposite angular momentum to its perch and, consequently, the Earth itself.

But this explanation was demolished in a fateful meeting of the French Academy of Sciences on October 22, 1894, by the physiologist Etienne-Jules Marey. Marey presented a sequence of high-speed photographs taken of a falling cat, the first of their kind, showing clearly that the cat begins falling upside-down without any rotation but nevertheless manages to turn over to land on its feet.

The revelations of the photographs threw the meeting into disarray. One member of the Academy declared that Marey “had presented them with a scientific paradox in direct contradiction with the most elementary mechanical principles.”

I’ll be back with more posts soon!

A decade of history of science!

Posted on December 31, 2019 by skullsinthestars

I’ve picked up a significant number of new followers on the blog lately, and this combined with the wrap-up of the decade seems like a good time to share some of my favorite history of science posts of the past ten years, for those who might have missed them. I can’t say that I’ve written at a particularly fast pace, but I do manage to find some of the strangest, most obscure, and most interesting tales about science and how it has been done! What follows is a list of posts, by year, and a short description of what makes them special to me.

Here’s hoping for another ten years of fascinating science and science history!

April 28, 2010: Mythbustin’: 1808 edition (the incombustible man). Science has a long history of debunking supposed supernatural powers, and a great and relatively little-known example of this was early efforts to explain how some performers seemed to be immune to heat and fire! A fun post that delves into both science and theatrics. 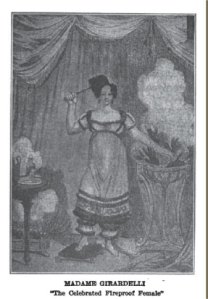 END_OF_DOCUMENT_TOKEN_TO_BE_REPLACED

Spoiler-filled The Rise of Skywalker thoughts…

Posted on December 29, 2019 by skullsinthestars

Back from China and hoping to get some more blogging done! After some 24 hours of non-stop travel, I got back on the 23rd and decided to stay awake as long as possible by going to see the final movie in the Star Wars Skywalker epic, The Rise of Skywalker.  Like the previous two episodes in this trilogy, I thought I would share some spoiler-laden thoughts on the movie here safely below the fold in a blog post where they can’t hurt anyone! 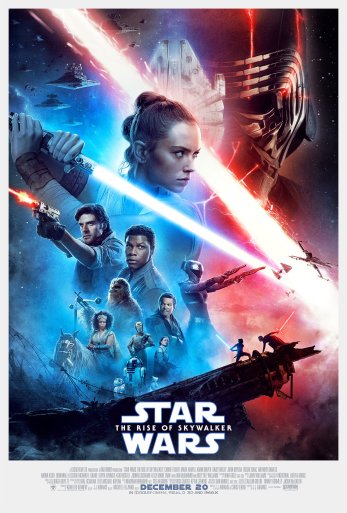 A word of warning, and a disclaimer, before I begin, though. My reaction to the movie was… not great. But everyone is entitled to their own opinion, and if you liked the movie, this is not a judgment or criticism of you. I’m not writing this to argue, but rather to just clear my head of the thoughts that have been spinning around since I saw the movie. Also, I really wanted to round out the posts I did about the first two movies, here and here.

And I’m not interested in arguing, either, so any hostile comments will probably be deleted and the posters blocked! Star Wars fandom has become rather toxic in recent years, and I don’t feel like indulging in that toxicity.

END_OF_DOCUMENT_TOKEN_TO_BE_REPLACED

Posted on December 7, 2019 by skullsinthestars

Now that Falling Felines is out, I’m doing research for my next popular science book, which I will talk more about soon! In the meantime, I will share interesting tidbits that I come across in my explorations, such as this gem. Also, I’m currently traveling in China — again — so my blog-writing resources are limited!

In today’s media-rich environment, one expects to see the views of one’s favorite authors shared, for better or worse, through both interviews and their own social media accounts.  One generally doesn’t, however, expect that authors of the Victorian and Edwardian eras received similar treatment.

Imagine my surprise, then, when I stumbled across an interview with H.G. Wells, one of the greats of science fiction!  Wells, of course, was an incredibly influential, prolific, and successful author of science fiction, and many of his novels are still relevant and worthwhile today: The Time Machine, The Island of Doctor Moreau, The Invisible Man, The War of the Worlds. 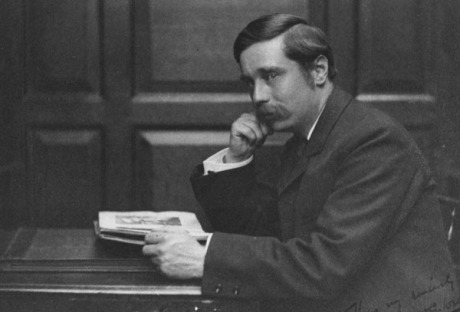 I found the interview in volume 22 of the magazine Current Literature, published in 1897, which appeared at the height of Wells’ popularity as a science fiction writer, with most of his major works having appeared in print, at least in magazine serial form. I share the interview in its entirety below, which gives some contemporary context of Wells’ popularity as well as his thoughts on writing and his lifestyle.  I share a few thoughts here and there when something catches my attention!

END_OF_DOCUMENT_TOKEN_TO_BE_REPLACED

Meeting Darlene and playing Jasmine: The Battle for the Mid-Realm!

Posted on November 20, 2019 by skullsinthestars

Life has had its ups and downs over the past few years, with a number of particularly painful downs. But every once in a while, something really lovely happens that reminds me that the world still has some surprises and joys in it, if one knows where to look!

So as folks who follow my blog are probably aware, I’ve been doing a long dive into old school Dungeons & Dragons products and the early history of role-playing games; here’s my last post on the subject, for those who have missed them!

In my recent explorations, I came across a game I hadn’t heard of before: Jasmine: The Battle for the Mid-Realm Collector Card Game.  The game came out in 1982, created by the artist Darlene and based on her illustrated adventure The Story of Jasmine which appeared in Dragon Magazine (back then known as The Dragon) from issue #37 to #48. Issue #37, which appeared in May 1980, in fact featured cover art of Jasmine by Darlene, as shown below! 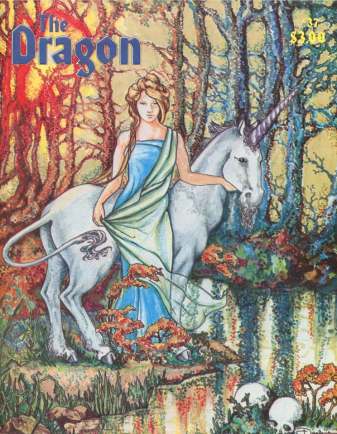 I was intrigued by the description of the card game on Wikipedia, and was curious to see if I could track down a copy of the game. Imagine my surprise when I discovered that Darlene is still selling signed copies of the limited edition printing from 1982 on her website! 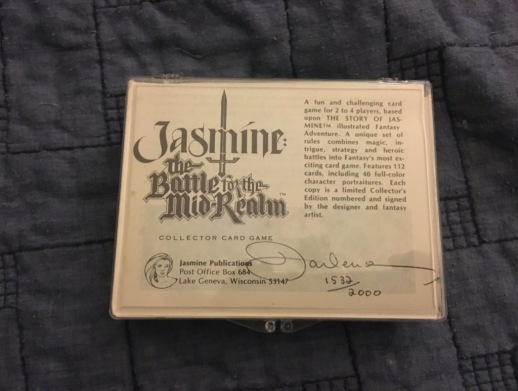 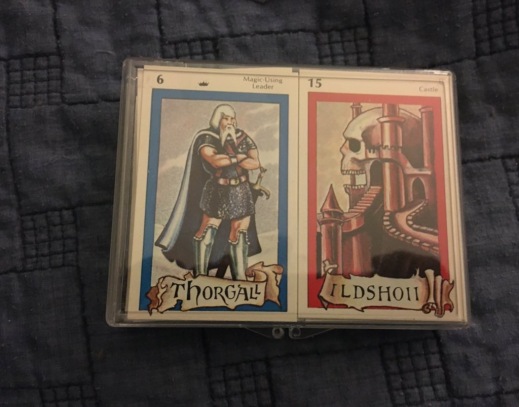 So I want to talk a bit about the game itself, but first let me share the delightful part: it turns out that Darlene lives not terribly far away from me, and noticed this when she was shipping the game. She graciously offered to come personally teach me and my friends how to play! My roommate Sarah and I met Darlene yesterday to have lunch and learn the game, and it was a great time. I took a few photos to commemorate the occasion, which I will share near the end of the post.

END_OF_DOCUMENT_TOKEN_TO_BE_REPLACED

The Third Grave, by David Case

Posted on November 17, 2019 by skullsinthestars

As a big fan of ancient Egypt, I am a sucker for horror novels based on ancient Egyptian mythology.  So when I saw that Valancourt Books had reprinted David Case’s 1981 novel The Third Grave earlier this year, I knew I had to read it! 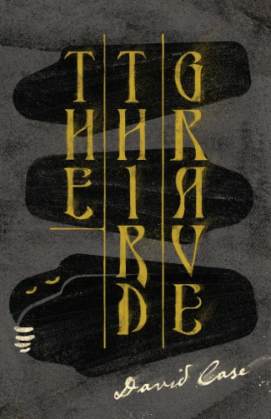 END_OF_DOCUMENT_TOKEN_TO_BE_REPLACED

Posted on November 6, 2019 by skullsinthestars

So, now that my book Falling Felines and Fundamental Physics is available for purchase, I’ve been answering questions for editors working on the translated editions that will appear.  These questions led me back to doing a little historical research, and as is always the case I’ve come across fun new things to share!

Today, I thought I would share a nice little bit of history about Edweard Muybridge (1830-1904). Muybridge, as many people know, produced the first high-speed photography of a horse in motion, definitively answering the question of whether a horse’s legs are completely off the ground at any time during a trot or a gallop.  The answer, as his famous 1878 photos shown below illustrate, is “yes.” 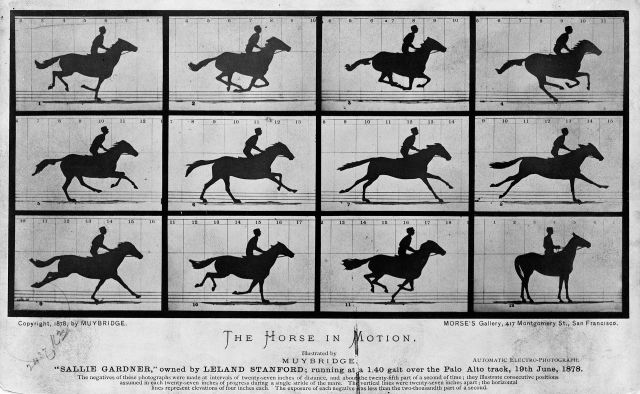 But Muybridge’s very first photographs of a horse in motion were taken much earlier, in early 1873. I do not believe they were ever published, but I found the earliest newspaper accounts of his accomplishment, and I thought I would share it here!